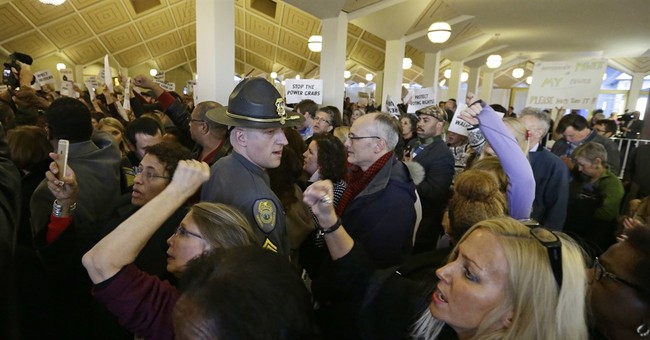 Outgoing Republican North Carolina Gov. Pat McCrory may have conceded the state’s gubernatorial election to Democratic Attorney General Roy Cooper, but his fellow Republicans in the state legislature held a special session to make sure that the governor-elect was stripped of the office’s powers over county and state election boards. Of course, state Democrats railed against this action, with Cooper vowing to file a lawsuit over the actions, which he did. Now, The Associated Press reports that the judge has blocked the law, which was signed into law by Gov. McCrory, from going into effect:

A North Carolina judge is temporarily blocking a new Republican-backed law that strips the incoming Democratic governor of his control over election boards just before he takes office.

Wake County Superior Court Judge Don Stephens ruled Friday that the risk to free and fair elections justified stopping the law from taking effect this weekend until it could be reviewed more closely. Stephens plans to review the law Thursday.

Gov.-elect. Roy Cooper sued on Friday to block the law, passed two weeks ago. It ends the control governors exert over statewide and county election boards. The lawsuit says the Republican-led General Assembly's action is unconstitutional because it violates separation of powers by giving legislators too much control over how election laws are administered.

Yes, I’m sure many Republicans are disappointed that McCrory lost his re-elect bid by a thin margin, but Cooper won. That’s the nature of elections; the other guy wins sometimes.