Obama’s Pick For The U.S. Commission on Civil Rights Has Infuriated The Nation’s Largest Police Union 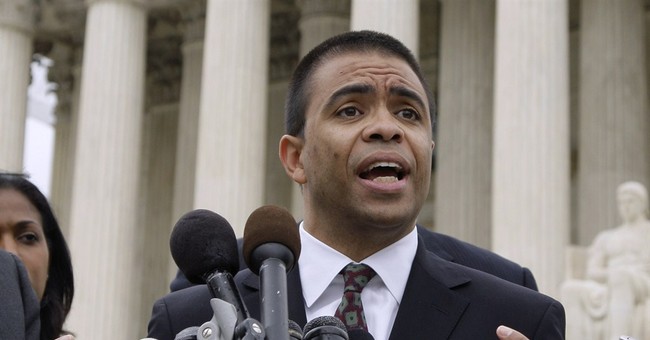 While Debo Adegbile’s nomination to become Assistant Attorney General for the Civil Rights Division failed in 2014, President Obama decided to put him on the U.S. Commission on Civil Rights, which has infuriated the country’s largest police union. Adegbile was a lawyer with the NAACP that worked to appeal the conviction of Mumia Abu-Jamal, who murdered a Philadelphia police officer in 1981. The Abu-Jamal appeal is what sunk his assistant attorney general nomination. Even with Sen. Harry Reid (D-NV) nuking the filibuster rules for presidential appointments, except for those relating to the Supreme Court, every Republican and seven Democrats voted against his nomination 52-47.

Now, The Fraternal Order of Police and The International Union of Police Associations have condemned his latest appointment, which carries a six-year term and does not require Senate confirmation (via Brent Scher/Free Beacon):

The Obama administration announced on Thursday that it was nominating Adegbile for a six-year term on the U.S. Commission on Civil Rights. Unlike its appointment of Adegbile in 2014 to chair the Justice Department Civil Rights Division, this nomination does not require approval from the Senate.

John McNesby, president of the Fraternal Order of Police’s chapter in Philadelphia, lashed out at the Obama administration over the appointment, calling it “Obama’s goodbye present to police across the nation.”

“That’s just the old kick in the teeth to the cops,” McNesby said during an appearance on the Dom Giordano Show on Friday morning. “I guess it’s Obama’s goodbye present to police across the nation.”

McNesby said that he saw the appointment as “payback to the FOP” and vowed that he would push the incoming Trump administration to fight it.

The International Union of Police Associations, a member organization of the AFL-CIO, also condemned the appointment on Friday.

“President Obama has, once again, gone out of his way to demonstrate his utter distain for our nation’s law enforcement officers,” said Sam Cabral, the union’s president, in a Friday statement.

Guess settling some old scores is on Obama’s docket before he makes his exit on January 20.