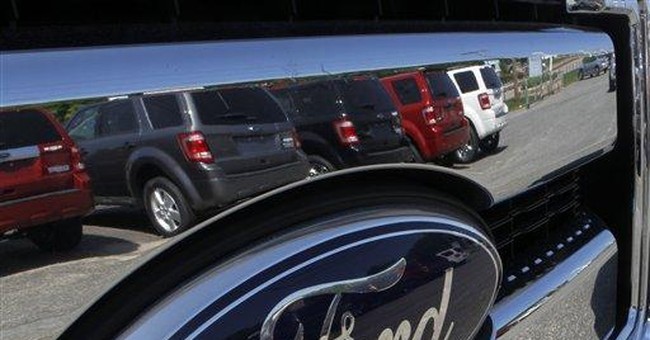 During the 2016 campaign, now President-elect Donald J. Trump said he would make it harder for businesses to export their jobs overseas. In 2015, the Ford Motor Company moved its heavy truck production from Mexico to Ohio (via CNN Money):

Ford's heavy duty pickup trucks which used to be built in Mexico started rolling off an assembly line in Ohio this week.

That's good news for the 1,000 Ford workers in Ohio, who might have otherwise been out of work.

It's also good publicity for Ford (F), which has been under fire for investing so much in Mexico. In April, the automaker said it would invest $2.5 billion in transmission plants in the Mexican states of Chihuahua and Guanajuato, creating about 3,800 jobs there.

Now, after his upset win over Hillary Clinton, three things are clear in the heartland of the automobile industry: a) Trump won union households; b) labor unions concede that the polling of their members probably didn't accurately gauge Trump support among their members; and c) Ford is now willing to work with a Trump White House on jobs growth and the economy (via Fox Business):

Overall, the seven states that have manufactured the most cars so far this year all lined up behind Trump: Michigan, Ohio, Indiana, Kentucky, Alabama, Tennessee and Missouri.

Trump carried 52% of the union vote in the battleground state of Ohio, far better than former Republican presidential candidate Mitt Romney’s 37% support. About half of Ohio voters believe trade with other countries costs American jobs, while 32% said trade creates jobs. Among those who think trade hurts jobs, 67% backed Trump.

An internal poll by the United Auto Workers union showed 28% support for Trump before the election, and another 6% of members were undecided. However, during a press conference following Trump’s victory, UAW President Dennis Williams conceded that the union’s poll may not have accurately reflected Trump’s overall support among auto workers.

Trump has threatened to push for tariffs as high as 35% on cars imported from Mexico, arguing that a tax is necessary to encourage companies to focus on building cars in the U.S. Ford CEO Mark Fields defended the company’s record, arguing that manufacturing moved to Mexico was replaced with other models built in the U.S. Chairman Bill Ford revealed in October that he met with Trump to discuss the matter.

After Trump’s victory, Ford released a statement saying it agrees with Trump “that it is really important to unite the country – and we look forward to working together to support economic growth and jobs.”

Trump was able to reach these people by slamming free trade agreements that have long been a source of scorn in these white working class communities or gutting jobs. In the presidential debates, Trump’s economic rhetoric scored high, even with Hillary leaners, though they were thirsty for more details. In short, trade was one of Trump’s biggest weapons to use against Hillary Clinton, whose husband signed the North America Free Trade Agreement into law. In the end, the voters who wanted change—and who saw Trump as the agent who could bring that—won out over Clinton.

Editor’s Note: This post originally reported that the Ford truck production move was recent. It was not. We apologize for the error and the headline has been tweaked to reflect the changes.