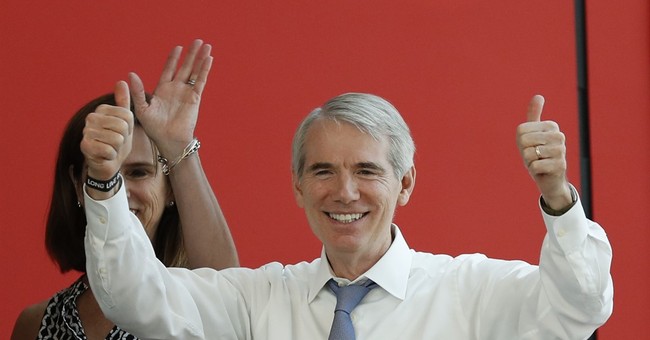 If there’s anywhere where the election has taken a surprising path, it’s Ohio. Donald Trump is likely to win the state tomorrow, but the senate race has taken a peculiar path. Once considered a competitive race, with Democrats drooling at the mouth over picking off incumbent Republican Rob Portman. They chose former Democratic Gov. Ted Strickland to be their standard bearer. Democrats dumped $20 million into that effort—and it’s devolved into a total and complete disaster. It’s partly due to Portman’s excellent campaign operation, including his engagement and extensive network of high school volunteers, which has reportedly become the envy of Senate Republicans running for re-election this year. The downside is, while Portman is finding “Reluctant Republicans” to turn out for him, they’re not voting for Trump in the general. After the Access Hollywood tape, where Trump made graphic remarks about women, Portman withdrew his support, but there’s going to be very little blowback: he’s up by double-digits over Strickland.

Sasha Issenberg had a good rundown of the Portman operation:

Even before Trump declared his candidacy, Portman was intent on building his own constituency beyond the Republican base. Strickland was certain to do well in places where no other Democrat could—his geographical base was in the Appalachian corner of southeastern Ohio—which meant that Portman would have to make up lost ground anywhere. “The goal of our targeting is to not only identify the people in the middle but to identify what issue each person cares about and then how to have a meaningful conversation with that person on that issue,” said Corry Bliss, who became Portman’s campaign manager in January 2015.

But Portman’s path to victory would depend on support beyond the Republican coalition, from voters who might be voting for Democrats elsewhere on the ballot and would not be targets for the victory program. “Portman has a much more concerted effort at trying to hit crossover voters,” said Kevin DeWine, a former state party chair close to Portman. “He’s essentially running 35 different mayor’s races, but he’s not doing it in conjunction with the top of the ticket.”

Portman had always been an energetic campaigner, but the stolid former trade negotiator and budget maven was not exactly a magnet for youthful activism. Yet Bliss focused more on the supply of labor than the demand side. He had always seen high-school students as an “untapped resource” for campaigns.

Campaign leadership made a priority out of cultivating those volunteers. Portman called them individually to thank them for knocking on doors, and when George W. Bush came to Cincinnati for a fundraiser, the campaign scheduled the former president to meet not only with large donors but rank-and-file activists as well. “It's never easy to get volunteers to knock on doors and make calls in the off-year,” said Bliss.

Beginning in the summer of 2015, Portman’s volunteers visited voters with scripts to identify supporters and suss out the priorities of others, while raising awareness of the low-key senator among his constituents. The data they collected fed into statistical models the campaign had commissioned from i360, the data warehouse within the political network associated with Charles and David Koch. The i360 models split the electorate into 22 segments, many of them related local issues that allow Portman to disassociate from national Republican politics and peel off swing voters.

Issenberg added that Portman eventually mobilized an army of 500 high school students to conduct phone banks and neighborhood canvassing. The amount of money he gave to the state’s victory operations surpassed what the RNC was giving, meaning that Portman was able to call the shots on Ohio’s get out the vote operation.

The debates also seem to been an area where Strickland has been ineffective in chipping into Portman’s lead. In their second bout, Portman hit Strickland for leaving the state in a terrible state of disrepair. While trade has been a contentious issue this year—and Strickland hit Portman for supporting free trade deals—Portman has been able to clinch union support, further adding to his base of support and lead over Strickland. Yet, getting back to the split ticket dilemma facing the GOP, the flip side (and Issenberg also mentioned this) are union workers splitting for Clinton and Portman.

Right now, the Real Clear Politics average has Portman with an 18-point lead over Strickland. Even Strickland has seemingly conceded that he’s going down tomorrow, while noting that outside money destroyed his campaign. That’s debatable. Maybe Portman was just a better candidate. In fact, that appears to be the case. If you’re a Democrat and you can’t convince union workers to get behind you, you’re problem isn’t outside money (via Canton Repository):

Now, even Strickland concedes that he might not win. At two campaign appearances Thursday, he began sentences with the phrase, “I don’t know what’s going to happen.”

Asked Thursday what he would do if he is not elected, he goes through the options: He can’t go back into

psychology, because his license has lapsed. Maybe he’ll teach. He is 75, but won’t rule out running for office again.

“I don’t know what I might do,” he said. “I’m not going to close the door on anything.”

Largely abandoned by the national party, he holds no malice toward them, saving his scorn for Portman.

Jennifer Duffy, the Senate editor with the Cook Political Report, disputes the notion that outside spending signaled the political death knell for Strickland.

“It was the way he didn’t raise money that attracted outside spending to his effort,” she said. “He never made fundraising goals, he didn’t run a very aggressive campaign, he didn’t get out there early and seek to define himself. If he had done what he needed to do the outside money would’ve been there for him.”

Strickland added that if he wakes up on November 9 and Clinton is president (and the Senate goes Democratic) he would be a happy man. This will be one of the first races called tomorrow night—and it looks like Portman is going to win the Buckeye beatdown in a landslide.