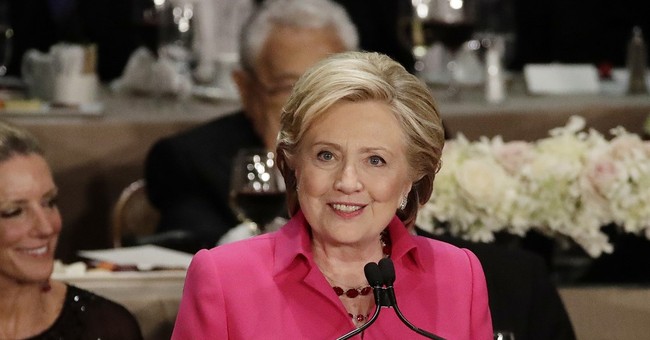 The Wall Street Journal editorial board tore into Hillary Clinton’s debate performance regarding the Supreme Court, saying that she represents a view that threatens American liberty, while giving Republican nominee, Donald Trump, props for having the superior grasp of our constitution.

For starters, The Journal ripped into Clinton’s notion that the Supreme Court should represent us, especially in its composition. That’s wrong. That’s what the legislative branch is for. Second, they aptly noted how Clinton supports abortion on demand and without exception, which is an extreme position. Support for third-trimester (aka late-term abortion) abortions is incredibly low—and there already is an exception for the life of the mother in the 2007 Gonzalez v. Carhart decision, which upheld the federal ban on partial birth abortion. On guns, Clinton pretty much said that she would appoint judges who would overturn the landmark Heller decision, but not before giving us all a chuckle by saying she supports the Second Amendment. In all, Clinton’s Supreme Court would be everything we on the Right have feared, a hard left, activist court that will seek to undermine individual rights to gun ownership and create a more solid legal basis for killing babies right up until birth. That’s one, hot American mess:

“The Supreme Court should represent all of us. That’s how I see the Court,” she said. “And the kind of people that I would be looking to nominate to the court would be in the great tradition of standing up to the powerful, standing up on our behalf of our rights as Americans.”

Where to begin with that one? The Supreme Court doesn’t—or shouldn’t—“represent” anyone. In the U.S. system that’s the job of the elected branches. The courts are appointed, not elected, so they can be nonpartisan adjudicators of competing legal claims.

Mrs. Clinton is suggesting that the Court should be a super-legislature that vindicates the will of what she calls “the American people,” which apparently excludes “the powerful.” But last we checked, the Constitution protects everyone, even the powerful. The law is supposed to protect individual rights, not an abstraction called “the people.”

The Democrat went downhill from there, promising to appoint judges who would essentially rewrite the First and Second Amendments. Asked about the 2008 Heller decision that upheld an individual right to bear arms, Mrs. Clinton claimed to support “reasonable regulation.” She said she criticized Heller because it overturned a District of Columbia law intended merely “to protect toddlers from guns and so they wanted people with guns to safely store them.”

Toddlers had nothing to do with it.

If Mrs. Clinton supports such gun restrictions, then she thinks an individual’s right to bear arms is meaningless. If the Justices she appoints agree with her, then they can gradually turn Heller into a shell of a right, restriction by restriction, even without overturning the precedent.

Then there’s the First Amendment, which Mrs. Clinton wants to rewrite by appointing Justices she said would “stand up and say no to Citizens United, a decision that has undermined the election system in our country because of the way it permits dark, unaccountable money to come into our electoral system.”

Citizens United is the 2010 Supreme Court decision that found that unions and corporations can spend money on political speech—in that specific case for a movie that was critical of Mrs. Clinton. The Democrat seems to take the different view that while atomized individuals might have the right to criticize politicians, heaven forbid if they want to band together to do it as a political interest group.

As for “dark” money, she certainly knows that territory. Does money get any darker than undisclosed Clinton Foundation donations from foreign business magnates tied to uranium concessions in Kazakhstan?

It’s no surprise that this is Clinton’s vision of America, especially on gun rights. She’s said publicly that she wants to look into Australian-style gun control, which includes gun bans and confiscation. Democrats and the anti-gun Left try to blind the public with the notion that they are for common sense gun control proposals, all of which are already established law. For abortion, it’s also no surprise that this party wants is adopting the abortion on demand position. After years of trying to convince the public that killing babies is totally okay—the Left has utterly failed. So, in a temper tantrum, they back this position, while saying that all opposition is due to the sexist, misogynistic system of patriarchy. Oh, and because the GOP hates women, or something. Are they aware that almost 30 percent of its members describe themselves as pro-life and are gun owners? For those people, the GOP is always open.

Trump isn’t the perfect candidate. In fact, like Clinton, he’s incredibly flawed and unpopular, but he won the primary, he’s the Republican nominee, and he’s not Hillary Clinton. If anything, the latter part should be enough to convince the Never Trump wing of standing idly by and allowing Clinton to easily take the White House. I’m sure many of you know that I’m not a Trump fan, but you don’t have to be a rocket scientist to know that he’s better than Clinton and a Trump White House working with a Republican Congress is better that Clinton’s anti-gun, pro-abortion progressive cesspool that she wants to force all of us to take a dip in. Yes, I will call out Trump for when he goes off the hinges or says something stupid, but that doesn’t mean I’m not going to back away and vote for Clinton or stay on the sidelines and abstain. You can vote for someone, while finding their brand of politics and personality to be incredibly unappealing. That point is magnified when the opposing candidate is Hillary Rodham Clinton. If you don’t want a Supreme Court that undercuts the First Amendment, the Second Amendment, and promotes a legal framework for abortion on demand, the choice for president is explicitly clear.