Progressive Group To Clinton Camp: Don't Go With A $15/Hour Minimum Wage, It Could Cost Jobs 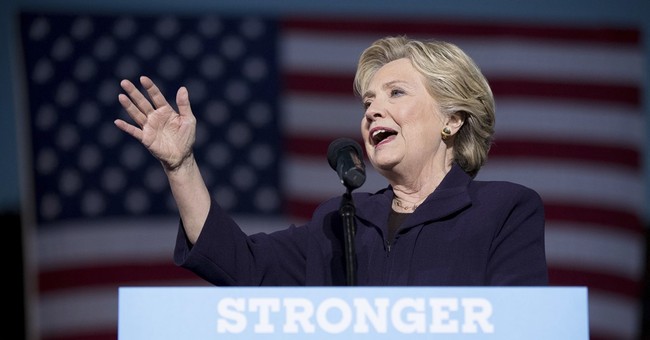 So it seems that some progressives do feel that a $15/hour minimum wage would cost jobs—and they urged Hillary Clinton not to support that proposal. The latest Wikileaks email dump detailed this exchange. In an April exchange between Clinton campaign chair John Podesta and Neera Tanden, president of the left-wing Center for American Progress (CAP), Tanden says that CAP doesn’t really support this cornerstone of progressive politics because “you will get a fair number of liberal economists who will say it will lose jobs.”

“Politically, we are not getting any pressure to join this from our end. I leave it to you guys to judge what that means for you. But I’m not sweating it,” she added.

The exchange was promoted by a prior email exchange between Podesta and left wing stalwart New York City Mayor Bill De Blasio on a progressive agenda that was going to be announced (at the time) on the steps on the U.S. Capitol in the next two weeks. The details of the agenda, which was suppose to be the liberal counterpart to the Republican Contract with America, was sent to De Blasio by John Del Cecato of AKPD Message and Media—a Democratic media consulting firm—that listed that $15/hour minimum wage as one of their bullet points:

The Progressive Agenda – a progressive alternative, of sorts, to the 1994 Republican Contract with America – will include specific proposals to lift the floor for working people, support working parents, and promote tax fairness – policies that reward work rather than just wealth.

The event stems from a summit that Mayor de Blasio convened in New York City in early April, where a small group of national progressive leaders gathered to discuss ways the country could combat the crisis of our time -- income inequality.

1. Lift the Floor for Working People > > > > · Raise the federal minimum wage, so that it reaches $15/hour, while indexing it to inflation. >

The email was sent on April 28, 2015, whose details were forward to Podesta by de Blasio

Following up on my conversations with each of you last week, I want to keep you updated on the next steps in our efforts to organize progressives nationally to take on income inequality. Below is an email going out today for an event coming up in 2 weeks. I believe you will agree with much of this content. Please let me know if you want to discuss. Thanks - Bill

Podesta then forwarded it to Tanden, with campaign manager Robby Mook, communications director Jennifer Palmieri, and top foreign policy adviser Jake Sullivan cc’d on the email. He was asking Tanden whether this is a point of concern. Tanden then reiterated her think tank’s position on the matter, while also noting that there was very little discussion about bank reform in the de Blasio’s email.

Sullivan then joined the exchange somewhat mockingly declaring that “John Podesta (and the Red Army) want to support $15!”

“And when you say Red Army, you mean the base of the Democratic party [sic], right? Just want to be clear here,” replied Tanden.

The following year, Hillary Clinton’s Democratic challenger Sen. Bernie Sanders (I-VT) was hitting her for not supporting a $15/hour minimum wage he was promoting. Clinton then said that she supported the fight for 15, which surprised Sanders.

“I am sure a lot of people are very surprised to learn that you supported raising the minimum wage to 15 bucks an hour,” he said. When this campaign began, I said that we’ve got to end the starvation minimum wage of $7.25, raise it to $15. Secretary Clinton said let's raise it to $12." Left-leaning Politifact even rated that as mostly true. Clinton then clarified her position (via Huffington Post 4/17/16):

In an interview on ABC’s “This Week” with George Stephanopoulos, Clinton said she would sign a $15 minimum wage bill put forth by Democrats if it had certain stipulations in it. The new wage floor would have to be phased in gradually and the effects of the hike would have to be evaluated in areas with lower costs of living.

She said that she and her primary competitor, Sen. Bernie Sanders (I-Vt.), weren’t as far apart on the issue as it seemed. Sanders has called for a $15 national minimum wage without qualification.

“I know everybody wants to make this some kind of big contrast. Well, it isn’t,” Clinton said.

In the end, the $15/hour provisions was added into the 2016 Democratic platform—and let’s not kid ourselves; Clinton would certainly sign a bill should she become president and get that law passed through Congress. Yeah, it’s a flip-flop, but that’s okay…if you’re a Democrat. And yes, a $15//hour minimum wage will cost jobs. It already has (700,000 in 2013 alone)—and its effect on Seattle was entirely predictable.