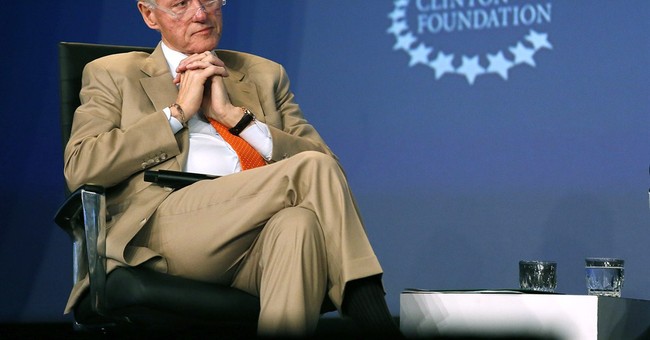 UPDATE: The Hill added that Clinton Foundation says they have found no evidence that they were hacked. Moreover, the files depicted on Guccifer 2.0’s site aren’t from the foundation. Well, I guess some things are just too good to be true.

The hacker Guccifer 2.0 has allegedly hacked the Clinton Foundation database, leaving an 860-megabyte file for all to download and peruse at their pleasure. There is a file ominously titled “pay to play.” All of this can be found on the hacker’s website, where donor lists ranging from small-time folks to big corporations are listed on a spreadsheet.

“It looks like big banks and corporations agreed to donate to the Democrats a certain percentage of the allocated TARP funds,” wrote Guccifer.

This hacker has also leaked files from Rep. Nancy Pelosi (D-CA) and the Democratic Congressional Campaign Committee. The Pelosi hack revealed that the California liberal knew Obama’s policy of airstrikes against ISIS wouldn’t work, but still stood behind his strategy, even saying that the terror group was contained back in 2015. This hacker, or group of hackers, was also responsible for the DNC email dump, which showed Democratic Party officials discussing ways to cripple Sen. Bernie Sanders’ presidential campaign. It led to resignations for most of the committee’s executive leadership. These documents were given to Wikileaks.

Politico added that many suspect Guccifer 2.0 to be an arm of the Kremlin:

Some cybersecurity experts believe Guccifer 2.0 is an invented identity that the Russian government is using to release files it obtains through hacking.

U.S. officials reportedly have high confidence that Russia hacked the Democratic National Committee, but have not yet publicly blamed Moscow.

Russian President Vladimir Putin has denied any role in the incidents.

While that can be debated endlessly, the fact remains that this person, or persons, have leaked legitimate documents from the DCCC, DNC, and Pelosi. Yes, it seems a bit odd that there is a file called “pay to play,” but as The Hill noted, Kevin McKeon, who did work at the DCCC in 2009, created one spreadsheet. Is this the same person? (via The Hill):

The Clinton Foundation discloses its donors, and many of the alleged donors published by Guccifer 2.0 do not appear to have given to the organization.

One spreadsheet was allegedly created by a Kevin C. McKeon at DCCC in 2009. There was a Kevin McKeon that worked at DCCC at that time.

The hacker or hackers known as Guccifer 2.0 has previously leaked apparently legitimate documents from breaches at the Democratic National Committee (DNC) and the DCCC.

But last month he published a spate of files he claimed were stolen from House Minority Leader Nancy Pelosi (D-Calif.) that in fact appeared to be repurposed from the DCCC hack.

Those documents also appeared to be consistent with what Guccifer 2.0 would have found on the DCCC server. Only one document concerned Pelosi, a "year in review" memo about fundraising numbers — the kinds of donation statistics that would likely be shared with the DCCC.

Again, before we get all excited, this could be a dud. We’ll keep you updated.