Ted Cruz: Yeah, I'll Help Donald With Debate Prep, And Let Me Tell You Again Why I Endorsed Trump 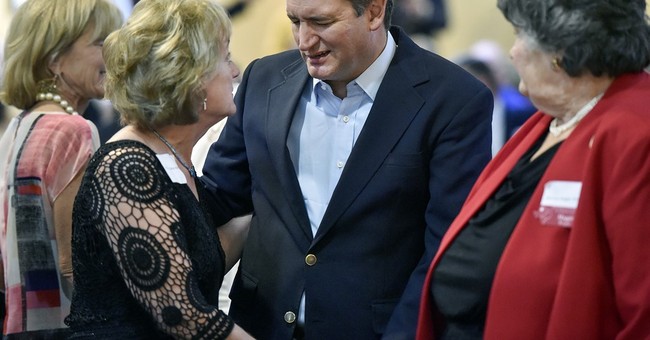 Sen. Ted Cruz (R-TX) was on The Hugh Hewitt Show earlier today, where the former presidential contender offered his thoughts about the debate and explained his endorsement of Donald Trump that caused some friction among conservatives. Cruz also said that he would certainly help Trump with debate preparation if they asked him to do so—on top of helping Republicans down ticket with their races as well:

Hugh Hewitt: This threat to the 2nd Amendment, the overturning of Heller, the threat to the 10th Amendment and the overturning of all federalism jurisprudence of which Justice Kennedy is a part. All of that goes out, and the expansion of the regulatory state is unchecked and it’s exponential in its growth. Given that, will you be out campaigning for Donald Trump? And if they ask you to help with debate prep, would you do so?

Ted Cruz: I am happy to help. I have conveyed that to them. I will do whatever I can to defeat Hillary Clinton. My heavy focus this cycle, in addition to defeating Hillary, is on preserving a Republican majority in the Senate, and I am working hard to help my colleagues get reelected. I’m working hard to raise money for them, to help turn out conservatives in their state. And then I’m also working hard in the state of Texas to turn out conservatives, because if conservatives stay home this cycle, we could see really bad results on down ticket ballots, on judicial races, on state rep races. I don’t want to see that happen. So I’m going to do everything I can to urge conservatives to come out and vote, even if they may not be thrilled at the candidates on the ballot. I’m urging them to come out and vote anyway, because the consequences of staying home, I think, are really quite significant.

Yet, this hasn’t been an easy road for Cruz. First, he was utterly eviscerated when he refused to endorse Trump at the Republican National Convention. Now, he’s reemerged from the bunker to endorse Trump. What happened? That seems to be what was on now-ex-Cruz supporter Glenn Beck’s mind with this prolonged interview with the Texas senator yesterday, which Guy described as “messy.” Beck had endorsed Cruz during the 2016 primaries, but went on to apologize to his viewers, saying it’s his fault that he feels that men can be George Washington in today’s era of politics. He also said he probably should have endorsed Marco Rubio, despite his disagreements with him on immigration. Like on Beck, Cruz told Hewitt that Trump’s getting serious in the Supreme Court was the thing that was able to move him. Oh, and how his endorsement wasn’t political or anything of that nature. Cruz then gave a very, very long explanation of how this wasn’t political:

Ted Cruz: You know, I don’t know. I will say the questions didn’t naturally lend themselves to it. You and I would both have loved to have seen a much more direct discussion of the Supreme Court, of the Constitution, of the Bill of Rights. I think to some extent, the moderator can be faulted for that, and that was just not the direction the conversation was going. But to my mind, that is one of the biggest, if not the biggest distinction between the two candidates. And as you know, the developments last week were a major reason why I made the decision to vote for Trump in November, because on Friday, he put out a list of 21 judges, and a couple of important things. One, as you noted, he put my friend and colleague, Mike Lee, at the top of the list. Senator Mike Lee, I think, would make an extraordinary Supreme Court justice to replace Antonin Scalia. But secondly, and this was the most important part of the list, and much of the media missed this, when he put it out, he explicitly committed that the only people he would consider are the 21 names on the list. Previously, they had put out a list of 11 names, but there had been no commitment other than these are among the people we will look at. On Friday, they locked themselves in and said these 21 are the only ones up for consideration. That was a major new development, and it was a major new development exactly along the lines of what I had urged in Cleveland, which is that I wanted to see our nominee defend freedom, defend the Constitution, and the Supreme Court is going to be right at the crossroads of determining whether the Bill of Rights remains vibrant in protecting our liberties, or whether it is rendered a dead letter by a Hillary Clinton judicial activist Court.

Hugh Hewitt: Now Senator Cruz, I want to spend a moment on this, because I was on the Meet the Press panel on Sunday defending your endorsement, and arguing you made it because of that very reason, with some pushback from Mike Murphy, among others, with whom you have battled in the past, I have to note for the record, that oh, no, this is a primary challenge. Ted Cruz is worried about Mike McCaul, Rick Perry, you name it. and I just, I don’t think you’re vulnerable. So how do you respond to that?

Ted Cruz: Well, it is not surprising that there are a bunch of people throwing rocks, and I would note that the people who are throwing rocks are by and large people who have hated the fact that I have stood up to Washington and the Senate since I have been elected. They have hated that I’ve taken on leadership and have been willing to lead the fight against Obamacare, willing to lead the fight against the debt ceiling, willing to lead the fight against amnesty. And when you have liberal Republicans who don’t want to see conservatives doing that, their natural fallback, and the fallback of many of the mainstream media, is anytime you’re fighting for conservative principles, they accuse you of being just political. That’s just what they say. They say oh, this is just politics. This is political. You know, the Wall Street Journal had an editorial where they said oh, it must be political. What inevitably happens is the Washington establishment accuses anyone who stands up to them of doing what they in fact are doing. Here’s the simple reality. If I were being political, I would have endorsed Donald Trump back in Cleveland at the convention. That was the obvious political thing to do. If the goal were political, that’s the easy decision. It’s why almost every other elected official did so. You know, you can have lots of criticisms about me. Some people say that I fight and stick too hard to my principles and am not willing enough to compromise. That’s a fair criticism. We can have a discussion about when compromise is appropriate and when it’s not. But the reason I stood my ground in Cleveland is actually the exact same reason I made the decision on Friday, which is that I believe every voter should follow your conscience and do not stay home. Come out and vote up and down the ticket for candidates you trust to defend freedom and defend the Constitution. And I hoped in Cleveland to help push our candidate, push our nominee to the right, to embrace freedom, to embrace the Constitution, because I think that’s the only way we win. And in the weeks and months since Cleveland, I had been urging the Trump campaign repeatedly to give more specificity, especially on the Supreme Court. And so about three weeks ago when I sat down with Mike Pence, and we had a conversation about what it would take for me to come on board, that was the major issue I stressed, was the Supreme Court. Every one of our rights, whether it’s the 2nd Amendment, whether it’s religious liberty, whether it’s free speech, we’re one vote away from losing it. And for me, at least, I wanted to see greater specificity, a greater degree of comfort, that Justice Scalia’s replacement and the subsequent justices would be principled Constitutionalists. You and I both know many of the people on that list of 21. It is a terrific list, and the commitment on Friday they made that they would only nominate from that list, to me, was a big deal, and that was enough to move me over to a yes. Also, because by any measure, Hillary would be a disaster, and at this point, it is abundantly clear the election’s a binary choice. Either Donald Trump or Hillary Clinton is going to be president. So if you don’t want Hillary, and I am very much in the Never Hillary camp, the only choice that can beat Hillary is Donald Trump.

You know these things that Cruz said about Trump were still true during the convention, especially the notion that the billionaire is much better than Clinton. Also, Beck pointed out to Cruz that he seems to be blending or confusing voting your conscience with it’s now a binary choice in the sense that Trump is the only person that can beat Hillary. Voting your conscience, to Beck, means that someone is incapable of giving their vote to any of these candidates. Cruz obviously disagreed. As for the Supreme Court talk, Guy said, “the 'Mike Lee/SCOTUS' fig leaf is preposterous on its face.” Ted wasted a lot of airtime to explain how his political endorsement of Trump is somehow not political and calculating. In fact, and Guy mentioned this in his Beck post, Allahpundit aptly noted that Cruz’s entire political career has been one long calculation. In this case, it’s a recalculation:

You heard Ted Cruz calculate for the first time today? Ted Cruz? Cruz’s entire career has been a calculation, and I say that as someone who voted for him this spring. He became a populist outsider running against Washington only after his attempt to join the establishment failed. He staged his ObamaCare filibuster in 2013 with no hope of stopping the law from being implemented but knowing that it would be great for his insurrectionist brand in the 2016 primaries. During the Gang of Eight debate, he offered an amendment that would have expanded guest workers while removing the path to citizenship knowing that that would let him argue the amendment both ways during his presidential run. During the GOP primaries, he’d claim it was a poison pill to sink the bill; during the general election, had he made it that far, he’d be pointing to the guest-workers part as proof that he’s not a radical restrictionist. Cruz dodged questions on legalizing illegals literally for years, in fact, until pressure from Trump finally forced him to rule it out late last year.

His “bromance” with Trump was itself a giant calculation designed to build goodwill among Trump’s populist voters in hopes that Cruz would inherit them once Trump collapsed. Then he made his boldest calculation yet at the convention, betting that a non-endorsement would make him look good after Trump inevitably melted down on the trail this fall and ended up being crushed by Clinton. Now that that hasn’t panned out, he’s re-calculating and reluctantly endorsing him so as not to be blamed for a narrow Trump defeat (or frozen out by the White House next year if Trump pulls off the upset). All he does is calculate, and his calculations are always to his personal political advantage.