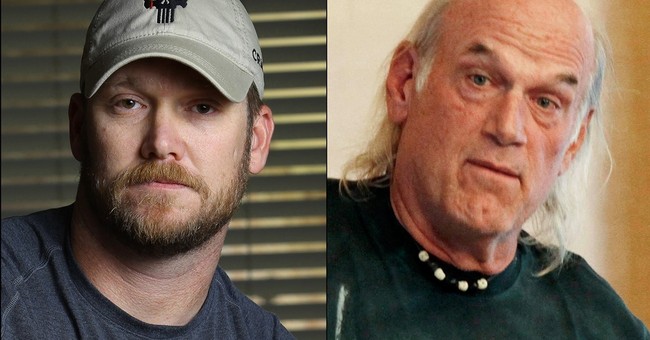 For former Minnesota Gov. Jesse Ventura, his $1.8 million judgment that he won from the estate of the late Navy SEAL sniper Chris Kyle has been vacated. Ventura filed a lawsuit against Kyle for defamation concerning an alleged bar fight that was included in Kyle’s memoir that occurred in 2006. The incident goes that Kyle and “Scruff face,” later identified as Ventura, got into a bar fight over the Iraq War. Ventura says that he was at the bar on the night of the incident, but no fight took place. At the initial trial, witnesses on both sides testified on behalf of Ventura and Kyle’s estate. Taya Kyle, Chris’s now widowed wife, was drawn into the lawsuit after Eddie Ray Routh, a veteran with a history of mental illness, murdered Chris in February of 2013. The original verdict was handed down in 2014, which the Kyle estate appealed (via CNN):

A Minnesota federal appeals court has reversed an earlier ruling that awarded $1.35 million to former Minnesota Gov. Jesse Ventura from the estate of Chris Kyle, the deceased former Navy SEAL, over a defamation lawsuit.

Ventura had filed the suit after Kyle, the author of "American Sniper," claimed in his best-selling autobiography that the two were involved in a physical altercation at a bar in 2006. The former Minnesota governor claimed Kyle's book sales were boosted after Kyle, who in the book recounts a bar fight he had with a man he called "Scruff Face," revealed that the man was Ventura, himself a former Navy SEAL.

The three circuit judges in Minneapolis ordered the judgment to be vacated on the ground that Ventura didn't have a contractual agreement with Kyle, according to court documents filed Monday.

In "American Sniper," Kyle claimed that "Scruff Face" made remarks he found offensive at a gathering of Navy SEALs in 2006 at McP's, a bar in Coronado, California, following the funeral of a SEAL killed in combat. According to Kyle's account, he "approached Scruff and asked him to 'cool it.'" "Scruff," Kyle claims, responded by saying, "You deserve to lose a few" and throwing a punch at him. The account ends with Kyle claiming he "laid him out. Tables flew. Stuff happened. Scruff Face ended up on the floor."

Ventura claims Kyle "fabricated the entire interaction" and testified that while he was in fact at the bar that night, he "had a normal evening without any verbal or physical altercation."

At least seven witnesses testified in court on behalf of both Kyle and Ventura supporting their account of events that night, but the jury sided with Ventura in 2014, almost eight years after the alleged incident, and he was awarded $1.35 million for unjust enrichment, as well as $500,000 for defamation, which was vacated by the court on Monday and will be sent back to court for a new trial.

This legal win for Taya Kyle and her family is welcome news in an otherwise very ugly lawsuit. In fact, the whole situation is just awful regarding this legal action filed by Ventura.