The Clinton Campaign's Scramble For California 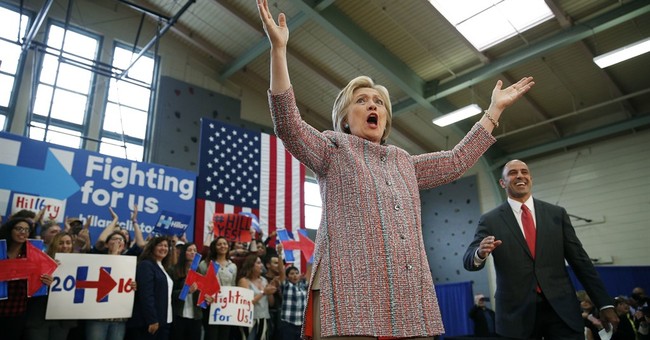 Hillary Clinton is going to be the Democratic nominee after June 7. It’s virtually guaranteed, but it’ll be dotted with stories about how much of a fragile standard-bearer she would be for Democrats going into the 2016 general election. For starters, it’s very possible that she could lose California. Vermont Sen. Bernie Sanders has been able to close the gap in the polling; she cancelled a campaign event in New Jersey, and she’s expanded her schedule in the Golden State to ward off a loss.

Again, her scramble for the state isn’t necessarily due to the fact that she needs it to win California. Clinton is definitely going to clinch the 85-100 delegates she needs to claim victory, as there are 576 delegates up for grabs in California, and they’re all allocated proportionally. There’s also the New Jersey primary, which has 142 delegates, where Clinton is leading Sanders by double-digits. But she does need the Golden State to win on a high note after a series of rather embarrassing defeats at the hands of a disheveled Democratic socialist who has been able to captivate some core groups of the Obama coalition. As The New York Times noted, Obama defeated Clinton in 2008, but she ended her campaign on a high note, along with California by an eight-point margin. Now, she’s losing states that she won in 2008, wasting valuable time and resources attacking Sanders instead of Trump, and failing miserably to sway Bernites that she isn’t compromised on the issues. Moreover, a defeat in California would increase the odds that Sanders supporters would be anything but orderly when Democrats hold their convention in Philadelphia come July (via NYT):

Mrs. Clinton’s lead in California has evaporated, going from seven percentage points over Mr. Sanders in March to two percentage points, within the margin of error, in a poll released Wednesday night by the nonpartisan Public Policy Institute of California.

That has created the possibility of an embarrassing defeat here for the Clinton campaign and complicated Mrs. Clinton’s plans to turn her focus to the general election against the presumptive Republican nominee, Donald J. Trump.

She dedicated this week to traversing the state for campaign events and fund-raisers and will return next week. Despite earlier signals that her campaign would avoid spending on expensive advertising in California, the campaign will begin running television ads in the Los Angeles, Fresno and Sacramento markets on Friday.

But Mr. Sanders may be helped by the state’s primary rules, which allow independents to vote in the Democratic primary as long as they register to do so. A surge of over 850,000 registrations between Jan. 1 and March 31 could indicate momentum for Mr. Sanders and signal a larger independent turnout than eight years ago, when they made up 18 percent of the Democratic primary electorate.

A defeat would also embolden Mr. Sanders and his supporters, some of who have pledged unrest at the Philadelphia convention if their issues are not taken seriously.

“Every minute she has to spend on Sanders is a moment and a dollar she can’t spend on Trump,” said Steven Maviglio, a Sacramento-based political consultant. But, he added: “It’s the Super Bowl for Bernie. It’s game over. He has nowhere else to put his money when this is done.”

To that end, Mr. Sanders has already spent 18 days in the state, speaking to crowds of thousands. And his campaign has spent $1.5 million on an ad urging Californians to choose “a new direction for the Democratic Party.”

Mrs. Clinton’s friends say winning the state is emotionally important for her to avoid humiliation, and to begin the battle against Mr. Trump from a position of strength.

Politico added onto the rather humiliating implications of a Clinton loss in California, along with the amount of resources that are being wasted in staving off an insurgent Sanders:

A California loss would cement the notion that even if Clinton isn’t what Trump would call a “total loser,” neither is she a decisive winner — despite her built-in strength and resources, she was incapable of shucking off a challenge from a self-described Democratic socialist even at the very end.

“Hillary has a lot of work to do to consolidate Democrats,” longtime ally Paul Begala conceded. “Proof of one of Bill Clinton’s Laws of Politics: ‘Democrats want to fall in love; Republicans just want to fall in line.”

Sanders’ surprising ability to do with ease exactly what Clinton can’t — make voters fall in love — has provided a damning contrast, even as Clinton is expected to finish out the primary season with more than 55 percent of the popular vote and a larger lead in pledged delegates than Obama ever scored over her.

To some extent, Sanders’ has already done damage to Clinton even if she pulls out a win. Her Brooklyn-based staff has been holding meetings to discuss the best way to attack Trump, and the candidate herself has been at the center of the effort, even presiding over one session last week.

But she has been diverted by the Sanders’ challenge, hopping back on a plane for a time-consuming West Coast campaign swing that otherwise might have been avoided. “There’s an opportunity cost” in not putting an end to Sanders earlier, said one Clinton insider.

Gov. Jerry Brown recently endorsed Clinton as we approach zero hour in California. Whether that will be enough remains to be seen, but what we’re seeing is Clinton—to her credit—at least trying to move away from what people thought she might become from the beginning of this campaign: a limousine liberal candidate, one who knows she’ll win—and won’t do much in terms of sharpening her skills as a retail politician. Granted, she hasn’t improved much in that arena. At the same time, it’s hard to sell yourself when you’re considered not far left enough on the issues by a very vocal and active segment of the Democratic Party, and continue to be caught in inconsistences regarding an ongoing FBI investigation into your private emails system that we now know wouldn’t have been approve by the State Department if she had asked, which she said she did—but did not. On the left, she’s refused to release her transcripts from her speeches to Wall Street banks, which is why this, coupled with the email server, is resonating when Trump calls her “crooked Hillary.” Moreover, it appears that younger voters, especially women voters under 30, view the email server as a pretty big deal. They’re looking for someone who would be held accountable, would take responsibility for their actions, be transparent, and not live by a different set of rules. Clinton has done nothing to live up to those standards.

If Clinton wins, there’s no guarantee that Sanders supporters will back off; they already have permits to protest in Philadelphia. Nevertheless, in the end, she will be the nominee, but not a decisive one. And she could have a monumental challenge in uniting the party, which has been fractured to a level that no one thought would be possible at the outset of this contest.

Reports: Taliban Decapitating Children and Hunting Down US Collaborators
Townhall
Here's an old tweet from Jen Rubin where she says it's not off the record if the journo doesn't agree to it
Twitchy
Ted Cruz Has a Question on the Droning of an Afghan Aid Worker That Must Be Answered
Redstate
Contradictions Gone Viral
PJ Media