Trump At NRA-ILA Forum: 'Fantastic Honor' To Get Endorsement, 'Heartless Hillary' Not Equipped To Be President 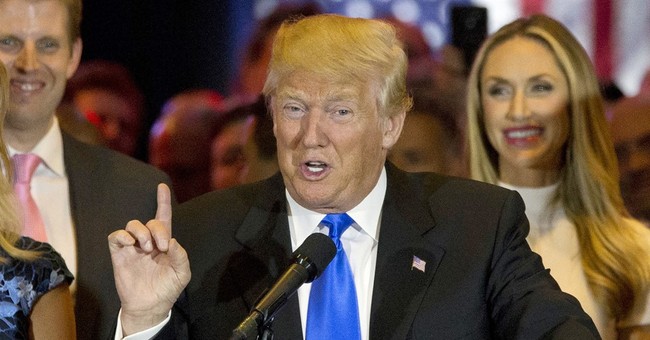 Louisville, KY- Billionaire Donald Trump took the stage at the National Rifle Association-Institute for Legislative Action’s Leadership Forum to an enthusiastic crowd and an endorsement from the organization. Trump said that the NRA endorsement was a surprise, and that he didn’t know he was going to get it.

“To get the endorsement, believe me, is a fantastic honor," said Trump.

Trump said he was happy about the state of the race. He cited a Rasmussen and Fox News Poll showing him leading “Crooked Hillary” 42/37. He also said he was going to put the coal miners back to work in Kentucky.

“You’d be surprised how much I know about Kentucky,” he said, which drew some laughter from the attendees.

As the world becomes less safe, the right to keep and bear arms has reached new importance. Trump said he’s seen watching what’s going on, with ISIS blowing up planes and launching attacks on innocent people. He pledged to bring calm and security back to the chaos we see all over the world.

He noted the Paris attacks and the San Bernardino shootings, citing the lack of firearms on the side of innocent citizenry and the carnage that followed when these terrorists, who had guns, were able to unleash a torrent of violence that has left hundreds dead. Trump promised to end gun-free zones if he’s elected president.

“We’re in a mess,” Trump said. And it’s not going to be solved unless you can talk about the problem of radical Islamic terrorism seriously.

He then took to hitting Hillary Clinton, calling her the most anti-Second Amendment candidate to run for the presidency, who he says suffers from poor judgment, and is looking forward to debating her in the fall. She would reverse D.C.v Heller, and if elected—could appoint three to five judges to the Supreme Court. Trump said that she wants to abolish the Second Amendment that would take the right of self-defense away from every American - especially women. Women have contributed to a surge in concealed carry permits, firearms training courses, and gun ownership. Since Clinton was to shred the Second Amendment, Trump gave Clinton a new nickname: Heartless Hillary.

“The NRA has led the fight to protect our fundamental freedoms,” said Trump. As a result, he said how he compiled a list of judges that he would pick for his nominees to fill the vacancy left by the late Justice Antonin Scalia. He also said it was meant to unite us. He then said that Hillary should compile a list of her own. Trump said the difference would be like night and day—and it won’t be good for the people attending this forum or for the rest of our country. The billionaire said that Clinton would abolish the Second Amendment – that’s what she’s going to go for.

The billionaire then discussed how he’s going to enforce immigration law and protect the border, so we don’t have another tragic Kate Steinle incident—Steinle was accidentally shot by an illegal immigrant in San Francisco while walking on a pier with her father last year. Her killer had been deported five times prior. Trump made a promise to put the criminals in jail, and ensure every American has the right to self-defense.

He said that Sen. Bernie Sanders should run as an Independent, and that he’s truly running in a rigged primary system.

Lastly, Trump reminded folks that the Second Amendment is on the ballot this November, and that Hillary is not equipped to be president if she wants to issue more executive orders on gun control.