Rubio May Be In Better Position, But Time Is Running Out To Block Trump 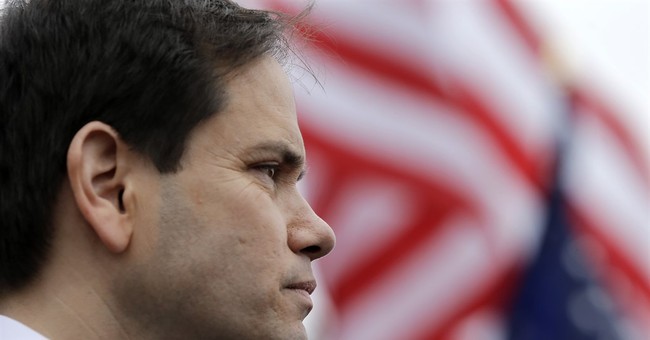 For Trumpites, the possibility of the billionaire businessman winning the GOP nomination was always there. For everyone else, the notion that Donald Trump could be the standard bearer for Republicans in 2016 is becoming a frightening reality. The GOP field is becoming smaller, but not soon enough for a consolidated anti-Trump vote to form. Right now, Sens. Ted Cruz (R-TX), Marco Rubio (R-FL), and Trump form the top tier of the field. Cruz is under siege for reportedly running a campaign devoid of integrity, which was explicitly shown when Rick Taylor, who was recently fired as the Texas senator’s communication’s director, peddled falsehoods about a video that he said showed Rubio mocking the Bible. The incident occurred in a lobby at a South Carolina Hampton Inn. Rubio ran into a Cruz staffer reading a Bible, along with the Texas senator’s father, Rafael, and remarked that the holy book did “[n]ot have many answers in it.” That turned out to be false, and Cruz asked for Tyler’s resignation yesterday.

It’s just one of many problems facing the Cruz campaign. Yes, he’s got a deep war chest heading into Super Tuesday, but besides a swindling pool of states with voter demographics favorable to him; he’s got an image problem. Allahpundit noted that Super Tuesday could be Cruz’s last stand:

A new poll out of Massachusetts today has Trump leading Rubio … 50/16. There’s not a moment to spare. While we’re at it, Rubio should probably go ahead and promise Cruz that he’ll be his first nominee for the Supreme Court if Cruz backs out now and endorses him. That’s asking a lot of Cruz’s pride after winning Iowa, but Cruz is nothing if not calculating. If he’s no longer beating Trump among evangelicals and he’s staring at a long race with relatively few evangelical votes to be had after March 1st, then his path is all but gone. If he fights on and loses, he’ll be stuck in the Senate as an unpopular junior member whose party is drifting in the opposite direction from him ideologically, making a successful 2020 or 2024 run — especially having lost the primary once before — unlikely. If he gets out and backs Rubio now, he could be the next Scalia.

He also mentioned that maybe Rubio should channel Larry Sabato’s advice; offer the VP spot to Kasich in exchange for his endorsement. Last night, on CNN, The Daily Caller’s Matt Lewis suggested that the campaigns meet and agree that only Cruz should be in Texas to win his state, Rubio for Florida, and Kasich for Ohio to block the delegates needed for Trump to clinch the nomination. He did admit that this was an extreme secondary protocol fraught with desperation.

Or Rubio could be in better shape to win the nomination now that Bush is out. Oh, and he’s seen

Despite his first-place finish, Trump’s be­ha­vi­or here made it harder for him to win the sup­port to build a lasting majority. His acidic attacks against core elements of the Republican Party hardened opposition to him. Last week’s NBC/Wall Street Journal poll showed that both Rubio and Ted Cruz comfortably beat him in one-on-one primary match­ups, a de­cis­ive shift from earli­er polling. Trump won only 16 per­cent of late-deciding South Carolina voters, well be­hind Rubio and Cruz, suggesting his cam­paign antics cost him at least some sup­port.

As diminished as the establishment is within the GOP, its three favored candidates (Ru­bio, Bush, John Kasich) out­distanced Trump, 38 to 33 percent. Rubio’s goal will now be to perform strongly in the suburban, college-educated elements within the Super Tuesday SEC states (in Nashville, Northern Virginia, and the Atlanta suburbs, to name a few). It’s the constituency that propelled Mitt Romney to victory in 2012. If Rubio can hit enough Southern delegate thresholds on Super Tuesday (a growing possibility given the South Carolina results), he’d be positioned to take the delegate lead two weeks later with wins in his home state of Florida and other swing states holding primaries that day. Trump may be the frontrunner, but Rubio’s odds of winning the nomination have also never been higher

Kraushaar’s colleague, Charlie Cook, went a bit further, noting that both Cruz and Rubio beat Trump in one-on-one matchups. He conceded that while it’s a single WSJ/NBC News poll, though one that considered a “gold standard” in polling–it could be the beginnings of a trend, in which Trump doesn’t emerge as the GOP’s nominee:

When the poll pitted two candidates against each other, Cruz and Rubio each bested Trump by 16 points, Cruz up 56 to 40 percent, Rubio 57 to 41 percent. Trump did come out on top against Bush by 11 points, 54 to 43 percent, demonstrating just how diminished the Bush brand has become. Against the less-known Kasich, Trump was up by 8 points, 52 to 44 percent.

One poll does not make a trend, but my hunch is that we’re seeing the beginning of one. It’s not clear whether the shift is occurring because Trump’s routine has grown stale, or because he went too far in the debate, or because GOP voters have shifted their focus to picking a president rather than sending a message. Maybe even the pro­spect of a va­cant seat on the Supreme Court has reinforced the view that this election is serious business with real consequences. Let me say it again: Trump is not going to be the Republican nominee.

Still, this isn’t full proof. Kraushaar noted that if Cruz and Rubio were defeated in their home states, it’d most likely mean that the Donald would win the nomination. But if he falls short, it would confirm what many are already saying about him: he has a ceiling. Rubio is looking better, but as Guy wrote, the clock is ticking for the rest of the party to be able to Dump Trump. The asteroid is approaching zero barrier.