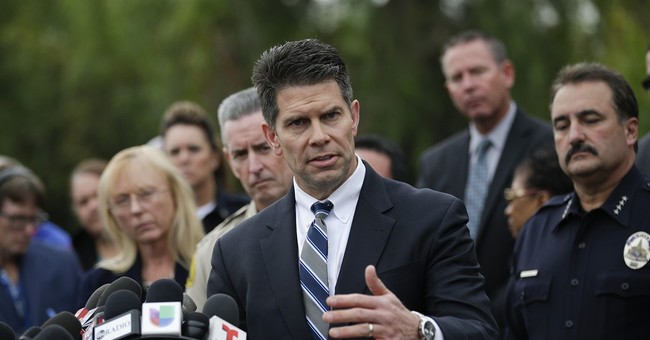 There’s been a lot of discussion over the FBI’s deployment of divers at Seccombe Lake, which is located in a park near the Inland Regional Center, where Syed Farook and Tashfeen Malik shot and killed 14 people. In a news conference held around 3 p.m. PST, David Bowdich, Assistant Director of the FBI’s Los Angeles office, said that they were following up on a lead that indicated the two shooters came into the area. He also added that he is not discussing what the dive team is looking for at present, though he reiterated his promise that this investigation will be a methodical, factual investigation. He said that it’s still a federal terrorism investigation, and that no stone will be left unturned.

Bowdich also said that neighborhood canvasses by federal agents at a later date is possible during the course of this multi-agency investigation that includes the FBI, ATF, San Bernardino Police Department, and County Sheriff’s office.

On a somber note, federal and local law enforcement officials met with the families of the victims who agreed to a meeting, and asked that the media, and the public, respect their privacy at this time. These families have emotional and physical scars that will take years to heal, some might never heal. Concerning the injured, Assistant Director Bowdich said that number has increased to 22 people. A person who did not know they were injured in the attack has now checked himself or herself into a local hospital.

Bowdich said the number one priority right now is to protect the integrity of the investigation should a prosecution occur in the years ahead. He also clarified a little about the alleged 2012 plot in nearby Riverside, California that’s been circulating in the media. He did confirm that four people were arrested on terrorism-related charges back in November 2012, but added that they were not planning on attacking the United States. The four men were planning to go overseas, train with the Taliban, and eventually join al-Qaeda in order to kill, among others, American targets. The FBI watched them, and they were never a danger to the immediate community with this incident. The press release of their arrests is featured below:

Four men have been charged for their roles in a plot to provide material support to terrorists by making arrangements to join al Qaeda and the Taliban in Afghanistan in order to kill, among others, American targets, announced André Birotte, Jr., the United States Attorney in Los Angeles, and Bill Lewis, the Assistant Director in Charge of the FBI’s Los Angeles Field Office.

According to a criminal complaint filed in U.S. District Court in the Central District of California, the defendants conspired to provide material support to terrorists in violation of Title 18, United States Code, Section 2339A, knowing or intending that such support was to be used in preparation for or in carrying out:

The defendants, listed below, are also known by alias identities listed in the criminal complaint.

Bowdich added that search for evidentiary items in the lake could take days, and that there is nothing dangerous in the immediate area. FBI agents have extensively searched the surrounding park. We don’t know if Farook and Malik discarded anything in the body of water, which requires specialized dive teams to conduct this part of investigation effectively.

The FBI is constructing a timeline, so they can retrace the shooters’ steps. Bowdich did not go into the legal situation with Enrique Marquez, a friend of Farook, who was allegedly involved in a planned attack that was reportedly aborted in 2012. Marquez bought the rifles used in the shooting last week. The Washington Post  reported that he is cooperating with authorities.