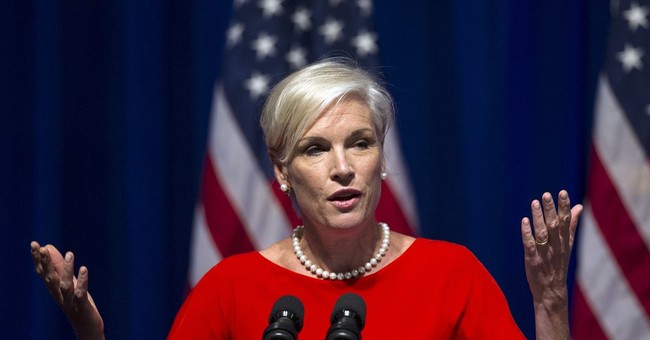 EMILY’s List has already compiled their list of Republicans they plan to target during next year’s election. Last June, they placed 15 House Republicans “on notice.” Now, Planned Parenthood, after months of playing defense, announced their $20 million war against Republicans for 2016 (via CNN):

"Extremists made the 2016 election about attacking reproductive rights," Planned Parenthood President Cecile Richards, who was grilled extensively on Capitol Hill in September, said in a video announcing the effort Tuesday.

The group is planning to focus on the White House and Senate races in a few key states, including New Hampshire, Ohio, Nevada, Pennsylvania and Wisconsin. The states not only have potentially competitive Senate races, but are also key swing states on the presidential map.

The $20 million will be spent on a mix of volunteer and activist organizing in each state and advertising.

"Enough is enough," Richards said in the video. "With our supporters, we're launching 'I Vote Planned Parenthood Action.' We'll organize and mobilize to elect lawmakers who are in our corner."

The non-profit that prides itself on being the vanguard for women’s health, along with being the nation’s number one abortion provider, was placed in crisis mode after the Center for Medical Progress released a series of investigative undercover videos about the organization. The infamous footage allegedly shows Planned Parenthood employees engaging in illegal trafficking of human body parts from aborted babies. Planned Parenthood contests that while the videos showed their employees in a particularly distasteful light, everything discussed were legal body tissue donations. Ironically, those legal activities were suspended in October:

Beleaguered abortion provider Planned Parenthood announced Tuesday it would no longer accept money from researchers for aborted baby parts, citing a desire to defang “an anti-abortion political agenda” in the wake of a series of undercover videos that appear to show the organization profited from fetal organ sales.

Planned Parenthood President Cecile Richards revealed the policy shift in a letter to Francis Collins, the director of the National Institutes of Health. Planned Parenthood has maintained it only recoups its own expenses for harvesting and donating fetal tissue, the actual sale of which is barred by federal law.

“In order to completely debunk the disingenuous argument that our opponents have been using – and to reveal the true political purpose of these attacks – our Federation has decided, going forward, that any Planned Parenthood health center that is involved in donating tissue after an abortion for medical research will…accept no reimbursement for its reasonable expenses,” Richards wrote.

In all, the non-profit was saying, the illegal activity with baby parts we were accused of engaging in isn’t true, but we’re no longer going to partake in that activity anymore…so we can expose anti-choice zealots.

At the same time, this isn’t something to scoff at entering next year’s elections. A couple hundred thousand dollars in key Senate races could decide the composition of the chamber next year. Young, college-educated, and single women still vote overwhelmingly Democratic, though women are not a monolithic voting bloc. They’re movable–as the 2014 elections showed. We just can’t be bogged down in silly fights over Planned Parenthood funding for now.

No doubt, I agree that our tax dollars shouldn’t go to the organization, but we all know that Obama is still the president, he will certainly veto, and Republicans won’t be able to cobble together a veto-proof majority for an override vote. The fallout is as it always has been with these fights: Republicans are anti-abortion extremists–and we always find some way to make things worse while trying to untangle this easily avoidable political trap. It also doesn’t help that there are virtually no conservative alternatives to combat these false war on women narratives being doled out by liberal-dominated media outlets, especially women’s magazines.

The GOP shouldn’t make it easier for Democrats to align a massive voting bloc against us come November 2016. A threat to shutdown the government over Planned Parenthood funding could facilitate that electoral outcome. The best way to prevent Planned Parenthood from gobbling up more of our tax dollars is to keep the House, which is a foregone conclusion, hold the Senate, and elect a pro-life Republican president next year.

Right now, the election is shifting more towards foreign policy, which is a plus for Republicans. And it was a deciding factor in some races during the 2014 midterms. Sen. Thom Tillis' (R-NC) campaign staff noted that when it was reported that former North Carolina Sen. Kay Hagan (D-NC) skipped a classified hearing on the Islamic State to attend a fundraiser, the needle began to swing to the right. There could be a resurgence of the “security moms,” given the horrific ISIS-led terrorist attack in Paris last Friday. The fact that enough Democrats joined Republicans to pass a bill (with a veto-proof majority) that prevents Syrian and Iraqi refugees from entering the country without passing a strict screening process is proof that they do not want to look weak on national security. It's becoming a more salient issue– and no one wants to look weak on foreign policy during an election year.