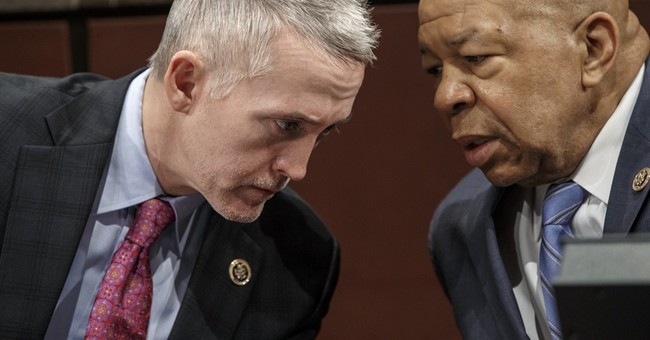 UPDATE: Clinton testimony delayed until State Department turns over the rest of the documents on Libya (via National Journal):

The GOP-led House panel probing the 2012 Benghazi attack has put off plans for a hearing with Hillary Clinton, telling Secretary of State John Kerry in a letter that State's failure to release documents is standing in the way.

"The only thing standing between the Committee and the former Secretary being able to discuss her tenure as Secretary of State as it relates to Libya and Benghazi is the Department of State's failure, in more than half a year, to produce a single, solitary email responsive to our request and subpoena," wrote Rep. Trey Gowdy, chairman of the Select Committee on Benghazi.

Gowdy last month had floated the idea of a hearing to take place as soon as May 18, but now says that lawmakers need more information to inform their questions to Clinton about the fatal attacks and her use of a private email server for State Department business.

"There is still the possibility of scheduling the former Secretary's appearance soon, but that is contingent upon Department of State compliance," Gowdy wrote.

Democrats on the panel allege that Gowdy is delaying the hearing and slow-walking the probe for political reasons.

In the letter, Gowdy wrote, “it is impossible for the Committee and the former Secretary to constructively discuss policies, decisions, and activities, related to Benghazi without your Department cooperating efficiently with the legitimate requests for relevant and salient information.”

On April 30, the Committee gained access to over 4,000 pages of documents from State’s Benghazi Accountability Review Board, which they say is in compliance with the documents Gowdy is seeking, though State delivered these materials two years after the request was filed by Congress.

Rep. Trey Gowdy, Chairman of the House Select Committee on Benghazi, is “likely” to say no to Clinton’s legal team regarding a one-time appearance to answer questions about the Libyan terrorist attack in September of 2012. Gowdy had asked the former secretary of state to appear before the Committee twice to answer questions relating to this subject and her private email system. David Kendall, Clinton’s lawyer, sent a letter saying that the Committee’s two-appearance request lacked precedent, but the former first lady agreed to one appearance, she would stay “as long as necessary” to answer all questions from the panel (via Politico):

The latest twist could come this week, when Gowdy, a three-term congressman from South Carolina who was appointed a year ago to lead the Benghazi panel, is expected to say whether he’ll accept Clinton’s offer to appear once — but only once — before his committee next week.

The answer likely will be no: Gowdy and Republicans wanted Clinton to appear for a private interview with the committee but later offered two public hearings as a compromise.

“The fear was if she was to do two hearings, he would take the information from the first, which would probably be about the emails, and cherry-pick it and use it in whatever way was most advantageous,” said Rep. Elijah Cummings (D-Md.), the top Democrat on the Benghazi panel. “This thing has gotten to be too much about Hillary Clinton and far away from what the parents of the victims (of the attacks) asked from us.”

At the very least, Gowdy wants the State Department to turn over a trove of documents before scheduling a public hearing with Clinton.

As his negotiations with Clinton’s high-powered attorney, David Kendall, continue, Gowdy is going out of his way to avoid the appearance of meddling in presidential politics — no easy task given who he’s dealing with. The 50-year-old congressman, a federal and state prosecutor earlier in his career, is eyeing a federal judgeship and hates being tagged as an ideologue.

Since Speaker John Boehner (R-Ohio) tapped Gowdy to run the Benghazi panel, Gowdy has repeatedly stressed that he’s unwilling to risk his reputation as a sincere legislator just to nab a Democratic heavyweight — even if the catch is the presumed Democratic nominee for president.

“This has always been about getting the facts … and the first thing you have to do is establish that you have all the relevant documents,” a Republican committee aide said. “That is the only thing he is looking for. … It would probably be easier if he was trying to be political, but he isn’t.”

When Clinton does finally appear, she’ll face a balancing act between the highly message-focused act of running for president and being forthright about the consequences of the Obama administration’s decisions in Libya.

Clinton’s camp has known since the House voted to create the Benghazi select committee in May 2014 that the former secretary of state would be asked to testify — and her allies on the Hill had long predicted that her appearance would come after she announced her candidacy.

Clinton backers say the spectacle of Clinton testifying under oath again about the Benghazi attacks will backfire on Republicans.

Regardless, one just has to go through the Committee’s various press releases to see that Gowdy has been accommodating of Mrs. Clinton. He requested Clinton turn over the private server to a third party to be analyzed, with her lawyers saying it wasn't worth it, noting that it had been wiped clean, along with any back-up systems attached to it. The Committee also wanted a transcribed interview with the former secretary of state, and even said that members of the Committee–and the transcriber–would come to Mrs. Clinton; that was also denied. Then, Gowdy’s request that Clinton appear before the House panel twice was semi-rebuffed, with Kendall saying that they would agree to one showing.

We don’t know if this hearing is going to be closed-door, or at an off-site location. It’s possible. A preliminary report on the investigation’s progress released on May 8, the one-year anniversary of the Committee being established, noted that the one of the biggest impediments in completing this investigation was the Obama White House.

It seems unlikely that this Committee will avoid the less than stellar optics of being overly political during the 2016 election, though that could have been Clinton’s strategy all-along to neutralize any questions over her judgment and portray the Committee as engaging in a witch hunt. At the same time, Clinton doesn’t seem keen on answering questions from the press, and her judgment and ethical compass have already been brought into question due to the foreign donations received from the Clinton Foundation.

On a separate note, speaking on the Clinton Foundation, a federal judge gave the State Department until September to honor FOIA requests made by Citizens United. Citizens United has filed a lawsuit over the matter:

A federal judge is giving the State Department until September to comply with a conservative group's request for records relating to correspondence between top aides to former Secretary of State Hillary Clinton and the Clinton Foundation, as well as a consulting business involving former Clinton staffers.

At a hearing Tuesday, U.S. District Court Judge Emmet Sullivan said he felt both sides in the case—the government and the Citizens United organization—were not being flexible enough in hammering out a path forward in the Freedom of Information Act dispute.

"You're being unreasonable," Sullivan told lawyers for both parties. He said he understood the State Department was being "flooded" with records requests in the wake of the revelation in March of Clinton's use of a personal email account as her sole account while serving as secretary, but that didn't mean it could keep forestalling Citizens United's requests, made last year.

"I can only imagine you're dealing with requests, but these are hot topics now," said Sullivan, who was appointed by President Bill Clinton.

"The Department of State is overwhelmed right now," Anderson said. "When requests are [taken] out of order that does affect other requesters."

In the requests, Citizens United sought records from State of correspondence between Hillary Clinton's Chief of Staff Cheryl Mills or Deputy Chief of Staff Huma Abedin and personnel at the Clinton Foundation, as well as communications between Abedin and officials of consulting firm Teneo. One request also asked for records of contacts between former State Department official Kris Balderston and Teneo founder Doug Band.