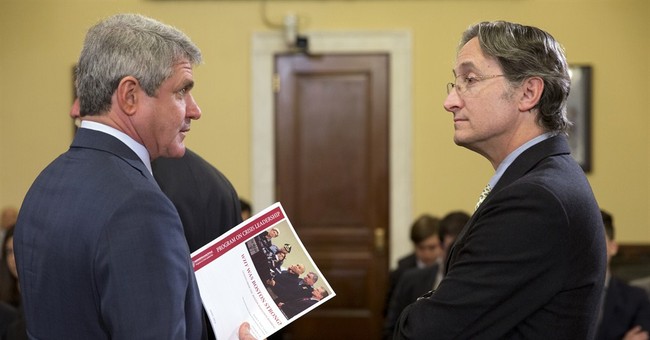 Hershey, Pa--Health care is a topic that will be part of any debate regarding America’s long-term fiscal health. Rep. Paul Ryan, Chairman of the House Ways and Means Committee, gave a brief overview of Obamacare, according to a Republican aide present at the session. Rep. Ryan discussed the subsidies, the exchanges, the taxes, the mandates, and the cuts to Medicare and Medicaid.

Forbes’ Avik Roy, who wrote a white paper on how the Singapore and Switzerland health care systems operate, talked about the large-scale impact this law will have on Americans’ lives.

Yet, while Obamacare continues to dominate discussion within Republican circles, lawmakers need to prepare for the King v. Burwell case that’s heading to the Supreme Court. Oral arguments will be heard on March 4.

Republicans at the retreat not only heard about the strategies related to the King v. Burwell case, but also discussed ways to coordinate with governors and state legislators on how to fight back, tort reform, coordination between Senate and House committees involved with health care policy, and the repeal of the medical devices tax.

It also seemed as if Republicans were gearing up to unveil a “patient-centered” plan that will reduce costs and provide more options, something that Obamacare has failed to do.

Perhaps some of ideas will be based off of Roy’s white paper.

The same aid also included some things said during the discussion on immigration.

House Homeland Security Chairman Rep. Michael McCaul (R-TX) laid out a blueprint for a border security package, while House Judiciary Chairman Bob Goodlatte (R-VA) delved into legal immigration and enforcement measures that could be taken within the United States.

Senate Homeland Security Chairman Ron Johnson (R-WI) said that input from House and Senate members on how to fix our broken immigration system is vital.

In all, Republicans at the immigration session want a system that strengthens the economy, secures the border, and rewards the immigrants who came here properly.

Chairman McCaul is already moving on his blueprint for a secure border, announcing the Secure Our Borders First Act (H.R. 399) in a press release yesterday:

“The federal government’s number one priority under the Constitution is to provide for the common defense, but when it comes to border security the administration has failed,” McCaul said. “Failure is not an option on this issue, so Congress must lead. The Secure Our Borders First Act ensures a smart, safe, and cost-effective border by building fencing where fencing is needed and allocating technology where technology is needed.

“It is the toughest border security bill ever before Congress, with real penalties for the administration for not doing their job. We need this legislation to protect the American people and sovereignty of this nation.”

The Secure Our Borders First Act requires the Department of Homeland Security (DHS) to achieve operational control of high traffic areas of the southwest border in two years – and the entire southwest border in five years – and establishes a commission to independently verify that the border is secure. The legislation enforces penalties on DHS political appointees if the administration does not meet the terms of the bill.

Additionally, the bill provides sector-by-sector analysis of threats and needs on the border and attaches to that the resources necessary to gain operational control. This includes the allocation of technology capabilities in each sector along the southern border, the construction and replacement of fencing and access roads, and additional flight hours.

The bill was referred to the committee and will move through regular order.

You can read the bill here.