Uh Oh: Rolling Stone Says There Are ‘Discrepancies’ In Their UVA Story 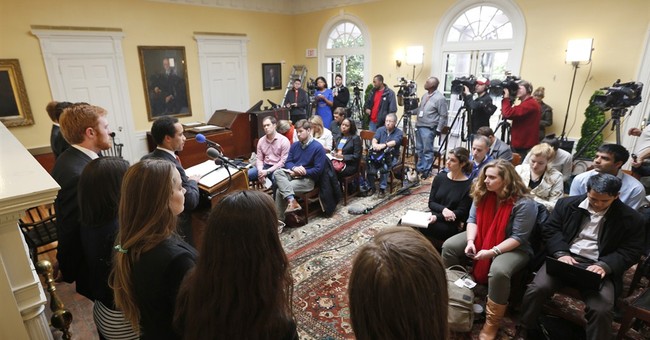 Last month, Rolling Stone published a piece about an alleged gang rape that took place at the University of Virginia. It created a media firestorm, yet the New Republic (pre-purge), the Washington Post, and the New York Times all reported on how Rolling Stone reporter, Sabrina Rubin Erdely, didn’t contact the accused attackers for their statement, which would also verify their existence.

Now, Rolling Stone has released this statement claiming that their trust was misplaced in their source–Jackie–and there are “discrepancies” in her account of events:

Last month, Rolling Stone published a story titled "A Rape on Campus" by Sabrina Rubin Erdely, which described a brutal gang rape of a woman named Jackie at a University of Virginia fraternity house; the university's failure to respond to this alleged assault – and the school's troubling history of indifference to many other instances of alleged sexual assaults. The story generated worldwide headlines and much soul-searching at UVA. University president Teresa Sullivan promised a full investigation and also to examine the way the school responds to sexual assault allegations.

Because of the sensitive nature of Jackie's story, we decided to honor her request not to contact the man she claimed orchestrated the attack on her nor any of the men she claimed participated in the attack for fear of retaliation against her. In the months Erdely spent reporting the story, Jackie neither said nor did anything that made Erdely, or Rolling Stone's editors and fact-checkers, question Jackie's credibility. Her friends and rape activists on campus strongly supported Jackie's account. She had spoken of the assault in campus forums. We reached out to both the local branch and the national leadership of the fraternity where Jackie said she was attacked. They responded that they couldn't confirm or deny her story but had concerns about the evidence.

In the face of new information, there now appear to be discrepancies in Jackie's account, and we have come to the conclusion that our trust in her was misplaced. We were trying to be sensitive to the unfair shame and humiliation many women feel after a sexual assault and now regret the decision to not contact the alleged assaulters to get their account. We are taking this seriously and apologize to anyone who was affected by the story.

So, what are the “discrepancies?” Well, for starters, the fraternity where Jackie was allegedly gang raped never had a party on the night of her attack (via WaPo):

Officials close to the fraternity said that the statement will indicate that Phi Kappa Psi did not host a party on Sept. 28, 2012, the night that a university student named Jackie alleges she was invited to a date party, lured into an upstairs room and was then ambushed and gang-raped by seven men who were rushing the fraternity.

The officials also said that no members of the fraternity were employed at the university’s Aquatic Fitness Center during that time frame — a detail Jackie provided in her account to Rolling Stone and in interviews with The Washington Post — and that no member of the house matches the description detailed in the Rolling Stone account.

The attorney, Ben Warthen, who has represented Phi Kappa Psi, said the statement would come out Friday afternoon. He declined to comment further.

A group of Jackie’s close friends, who are sex assault awareness advocates at U-Va., said they believe something traumatic happened to Jackie but have come to doubt her account. They said details have changed over time, and they have not been able to verify key points of the story in recent days. A name of an alleged attacker that Jackie provided to them for the first time this week, for example, turned out to be similar to the name of a student who belongs to a different fraternity, and no one by that name has been a member of Phi Kappa Psi.

Reached by phone, that man, a U-Va. graduate, said Friday that he did work at the Aquatic Fitness Center and was familiar with Jackie’s name. He said, however, that he had never met Jackie in person and had never taken her on a date. He also confirmed that he was not a member of Phi Kappa Psi.

Heck, even the feminist Jezebel publication issued an apology to those who were skeptical of the UVA story [warning: some strong language]:

This is really, really bad. It means, of course, that when I dismissed Richard Bradley and Robby Soave's doubts about the story and called them "idiots" for picking apart Jackie's account, I was dead fucking wrong, and for that I sincerely apologize. It means that my conviction that Sabrina Rubin Erdely had fact-checked her story in ways that were not visible to the public was also wrong. It's bad, bad, bad all around. (And, frankly, it could have been avoided, had Erdely been clearer in her disclosures about what she'd done to reach Jackie's alleged attackers and what her agreement with the girl had been. This announcement wouldn't be producing nearly the same shockwaves if those things had been clearly outlined.)

And, this isn’t the first time Sabrina Erdely has been criticized for her reporting. The Federalist’s Mollie Hemingway found a 2012 story from Erdely about how a school district in Minnesota handled anti-gay bullying; the superintendent called the piece a “brutal and distorted attack:”

Rolling Stone magazine has the Anoka-Hennepin school district in a rage.

"This is a vicious insult to all of you who have worked so hard to make this district and this community a better place," the head of Minnesota's largest school district said in a voicemail fired off to his staff.

Written by Sabrina Rubin Erdely, "One Town's War on Gay Teens" chronicles the development of the district's controversial sexual orientation curriculum policy while weaving in personal stories of students who say they were bullied over their real or perceived sexual orientation.

Further, Carlson reiterated that the district's investigation into the suicides found no direct link to bullying.

Laurie Thompson, president of the Parents Action League [a conservative parent group], said Erdely offered no proof that evangelicals or the district's policy had anything to do with the student suicides or bullying. Thompson said Erdely "repeated and amplified the most biased and unverifiable rumors regarding bullying" to reflect "another agenda altogether - attacking evangelical Christians and portraying them as unreasonable bigots." Erdely said she asked the district to forward her contact information to teachers willing to talk about their attempts to affirm gay students and didn't hear from anyone. She also said she mentioned the district's progress, albeit late in the article and perhaps not in the "glowing light the superintendent would have liked."

Regardless, it’s pretty much confirmed that Rolling Stone botched this story–and made addressing the serious issue of sexual assault all the more difficult.

Will lawsuits to be filed? Probably.

Congrats to Phi Kappa Psi for your acquisition of Rolling Stone.

UPDATE: Sean Woods, who edited the story, will remain at the publication.

Sean Woods, who edited the UVA rape story, will remain with Rolling Stone, a spokesperson tells me. (fixed typo)