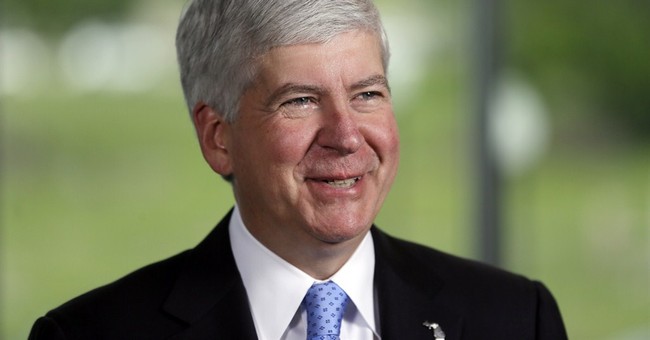 The Michigan gubernatorial race is going to come down to the wire as a new USA Today/Suffolk poll shows that incumbent Republican Governor Rick Snyder is trailing his Democratic opponent, Mark Schauer, by two points. On average, Real Clear Politics has Snyder ahead by one point.

This image courtesy of RCP

Like in 2010, Snyder was able to grab the endorsement of former Republican Michigan Governor William Milliken, who associates with the more moderate wing of the GOP; he endorsed Democratic Rep. Gary Peters for U.S. Senate. While Milliken’s 2010 endorsement was able to curry favor with moderate Michigan voters, it may be more of an uphill battle this time around as Schauer has a better approval rating with this bloc of voters, though many are unsure what they think about him (via MLive):

Milliken endorsed Snyder in 2010, helping him woo moderates in his contested Republican primary that saw other candidates winning support from the likes of Michelle Bachmann and Mike Huckabee.

Snyder, who is running neck-and-neck in recent polls with Democratic challenger Mark Schauer, may have a tougher time winning over moderates this year.

Recent numbers from Public Policy Polling suggest that Schauer has a better favorability rating with self-described moderates, although many still weren't sure what they thought of the Democrat.

But not all is lost. The poll also found that 51 percent of Michigan voters feel that the economy is improving. Additionally, the unemployment rate fell to 7.4 percent, which marks the lowest point since 2008. While still higher than the national average, Gov. Snyder can easily market a narrative that things are improving in the Mitten State. After all, the unemployment rate for Michigan was at 11 percent when Snyder took office in January of 2011.

Recently, Gov. Snyder announced that he’s planning to host a series of town hall meetings across the state. Like in 2010, Snyder is reaching out to Michigan voters to discuss the issues that matter most to them, lay out what will be achieved, and rehash what’s been accomplished since his 2010 gubernatorial victory.

The Road To Recovery: The Next Four Years town hall tour begins later this month on September 29th in Kalamazoo. Snyder's campaign will then head to Sterling Heights on October 2 and Detroit on October 4th.