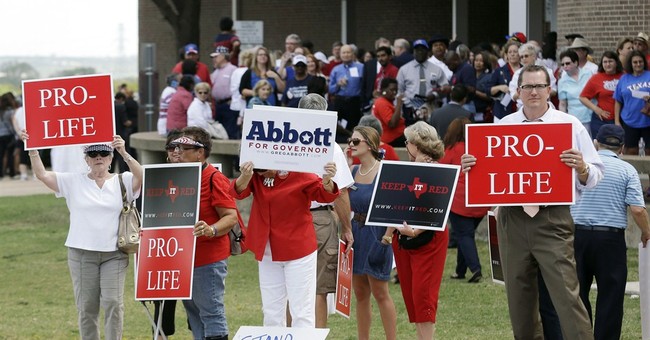 Texas' abortion law won't be fully implemented after a federal judge ruled it as unconstitutional. Right now, the Lone Star State has 19 abortion clinics, which is down from a little over 40 a year ago. If this law had gone into effect, it would’ve left 6 to 7 clinics open, mostly in major urban areas. The judge considered that an “undue burden” on Texas women (via Associated Press/ABC News):

Tough new Texas abortion restrictions are on hold after a federal judge found Republican-led efforts to hold abortion clinics to hospital-level operating standards unconstitutional in a ruling that spares more than a dozen clinics from imminent closure.

The state vowed to quickly appeal Friday's ruling by U.S. District Judge Lee Yeakel in Austin, who cited other rules GOP lawmakers have recently passed in his decision to throw out requirements that clinics meet hospital operating standards.

Those prior abortion restrictions include mandatory sonograms and a 24-hour waiting period after a woman first seeks out an abortion.

"These substantial obstacles have reached a tipping point," Yeakel wrote in a 21-page opinion.

Yeakel sided with clinics that sued over one of the most disputed measures of a sweeping anti-abortion bill signed by Republican Gov. Rick Perry in 2013. The ruling stops new clinic requirements that would have left seven abortion facilities in Texas come Monday, when the law was set to take effect.

Texas Attorney General Greg Abbott, a Republican who is the favorite to become governor next year, said he would seek an immediate appeal to try to preserve the new clinic rules.

Under the new restrictions, the only remaining abortion facilities in Texas would have been in major cities, and there would have been none in the entire western half of the nation's second-largest state. For women in El Paso, the closest abortion provider would be in New Mexico — an option the state wanted Yeakel to take into consideration, even though New Mexico's rules for abortion clinics are far less rigorous.

The first wave of regulation that went into effect last November, specifically banning abortions 20 weeks after pregnancy and requiring physicians to have admitting privileges no further than 30 miles from where the abortion is performed, according to the Austin Chronicle.

The story also reiterated how the second wave of regulations would’ve decimated the abortion industry in Texas:

The final part of HB 2 (to take effect Sept. 1) requires clinics to meet building code compliance that match the standards of ambulatory surgical centers, a costly regulation that is estimated to shut down 14 clinics, leaving the state with less than 10 abortion providers. To date, roughly 50% of Texas abortion clinics have shuttered their doors since HB 2.

Yesterday, Wendy Davis, Abbott’s Democratic opponent, criticized him for withdrawing from the televised statewide debate, citing format concerns. Both camps agreed to have a debate on September 30–and Abbott accepted an invitation from another network hours later. Also, the two campaigns are debating on September 19 in the Rio Grande Valley.

It’s safe to assume that a question about this development on HB 2 will be asked during the debate. Davis, who’s hasn’t made abortion a centerpiece of her gubernatorial run, will have to find some way to maneuver around her highly unpopular position on this issue.  Then again, she could just say what she believes and show once again how radical she is on the subject.

This could be a good thing for Abbott. After all, 60 percent of American women support banning abortions after 20 weeks into a pregnancy:

A new Quinnipiac poll shows 60 percent of women prefer allowing unrestricted abortions for only the first 20 weeks of pregnancy rather than the Supreme Court-prescribed 24 weeks. Among men, 50 percent support the 20-week law — a 10-point gap.

A Washington Post-ABC News poll showed the gap at seven points, while two other polls (from NBC/Wall Street Journal and National Journal) showed it at six and four, respectively.

And those numbers may actually understate support among women for the new restrictions.

Oh, and how do Hispanics feel about abortion in Texas? Well, as Politico mentioned in July of last year, “the Pew Forum on Religion and Public Life found that 53 percent of Hispanic Catholics say abortion should be illegal in all or most cases. That’s a lower percentage than white evangelical Protestants and Mormons, but it’s higher than all other religious voting groups, including white Catholics, white mainline Protestants, black Protestants, and Jews.”

So, who’s ready for this debate this September?