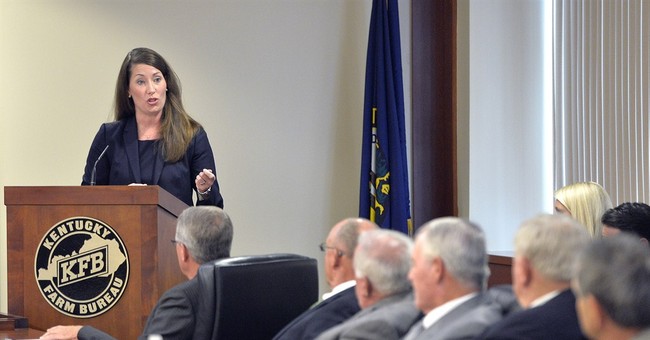 Last week, Republican Sen. Mitch McConnell debated his Democratic opponent, Alison Lundergan Grimes, at Kentucky’s Farm Bureau in Lexington. The 90-minute forum focused on numerous issues, including Obamacare. Ms. Grimes “sounded rehearsed,” aligned much of her rhetoric with talking points, and had a “nervous tic” of gesticulating wildly, according to Politico:

Grimes, 35, sounded rehearsed, her answers hewing closely to talking points. The first-term secretary of State mispronounced the legislative word “omnibus” and overly gestured with her hands, a distracting nervous tic. McConnell stayed seated at a conference table as he fielded questions and Grimes answered from behind a podium.

The senator, who has opened a slight lead in recent public polls, mentioned Democratic counterpart Harry Reid in nearly every answer as he tried repeatedly to nationalize the contest.

An example of Grimes’ less-than-outstanding performance can be found in her response on immigration:

ALISON LUNDERGAN GRIMES: These and many more things are what we can accomplish if we had a senator that didn’t just want to do piecemeal-by-piecemeal, comprehensive immigration reform. Thirty years–that’s how long Mitch McConnell has been there, and he wants six more just to do it year-by-year what many are already doing right now in the United States Senate.

Also, by “rehearsed…talking points,” I mean war on women malarkey [emphasis mine]:

McConnell said that voters should look at who is supporting her and mentioned Massachusetts Sen. Elizabeth Warren’s trip to the state on her behalf, as well as the backing of the AFL-CIO labor union, to say that she will not actually support free-trade agreements when they come up for a vote.

Grimes responded with umbrage, suggesting that this was a gendered criticism.

“Women aren’t supposed to just be seen. We will be heard,” she said. “I’m a strong independent Kentucky woman who will always put our farm families first.”

On Obamacare: Grimes said McConnell’s support for repealing the law would “take us back to the days where you could be discriminated against just for being a woman.”

“The law isn’t perfect, but we have to work to fix it,” she said.

McConnell fired back: “She won’t use the words, but she supports Obamacare — the single worst piece of legislation that’s been passed in the last half century.”

He touted his support for tort reform and noted that trial lawyers have poured money into Grimes’ coffers.

McConnell and Grimes have engaged in lawfare over campaign contributions. The Kentucky GOP has filed an ethics complaint against Grimes over her use of a bus acquired by her father's company, where she is allegedly renting it under market prices. Grimes’ campaign alleges that McConnell used the Senate Dining Room, an exclusive location, to elicit a campaign contribution from the CEO of Delta Air Lines, Rick Anderson. Then again, Anderson has given $20,000 to the Kentucky GOP in the past two years. Although, trading access to the dining room for a campaign contribution is behavior that the Grimes people are exploiting to show that McConnell is part of the problem in Washington.

But we shall see how the debate goes this fall. Sen. McConnell recently accepted Ms. Grimes’ invitation to a debate scheduled for October 13.  Given her performance last week, a long debate camp is probably in order.

UPDATE: The Washington Free Beacon has more videos on Grimes speaking about women and hard labor, where she got up every morning to "muck stalls."