Thank You For Smoking <em>(Crack)</em> 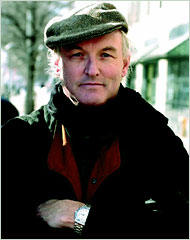 serves to highlight the emerging chasm between traditional mainstream conservatives (my definition would include men like Ronald Reagan and Rush Limbaugh as well-known examples of this) -- and the conservative intelligentsia.

After eight years of George W. Bush's presidency, realignment on the right is predictable.  My hope and expectation, however, was that the Bush loyalists -- who were never really conservatives to begin with -- would go.  I also hoped conservatives would begin standing up for conservative policies, such as opposing the bailout, etc.  I have, however, been surprised to see so many conservative writers also abandoning the conservative movement (make no mistake, they are leaving the movement, not vice versa).

Christopher Buckley's decision, for example, to endorse Barack Obama defies logic it is as ridiculous as the notion that man who doesn't believe America is free enough deciding to defect to the Soviet Union.

If Buckley believes John McCain isn't conservative enough, that is a legitimate and honorable position to take.  However, there are many options available to him, short of endorsing a socialist.

I can only attribute this phenomenon to a few possible factors:

1.  The first generation of conservative intellectuals was joining a losing cause -- but they espoused their beliefs, anyway.  Sadly, it is not uncommon for the second or third generation to become soft and become prodigal sons and daughters.  Christopher Buckley is, in my estimation, a nabob who – like many of his friends – has lost his moorings -- most likely due to the milieu in which he lives.  My guess is that some of these conservatives have simply become co-opted by the liberal media elite.

2.  It all comes down to what you value.  Buckley -- and others -- may put more value on intellect than on political philosophy.  Personally, I would prefer a dumb conservative to a smart liberal (in fact, I would prefer a stupid liberal to a smart liberal).  A well-read and learned man, Ronald Reagan also had a profound belief in the common man and the wisdom of average Americans.  I think that belief is no longer present among the conservative elite.  They view Sarah Palin -- and conservatives who support her -- as the Lumpenproletariat.

3.  While I believe Christopher Buckley truly believes in what he is doing, that may not be the case for others who see this as an opportunity to make a name for themselves.  It has been said that "every great cause begins as a movement, becomes a business, and eventually degenerates into a racket."  To a certain degree, this is true of the conservative movement.  There are a surprising number of dynasties for a movement that praises "rugged individualism."  In many cases, conservatism has become a family business.  Of course, Christopher Buckley is, in his own right, a talented writer.

While Buckley's decision to endorse Obama defies logic, more confusing still, was Buckley's Brett Farvesque anger at National Review for having the audacity to actually accept his resignation, once proffered.  In my book, you can't quit a job and then complain that they allowed you to do so.

But the bottom line is that, while it is plausible for a conservative to vote for a third party – or to abstain from voting for McCain – no real conservative could cast their vote for Obama – a man who (with his utopian schemes) wants to “immanentize the eschaton”.

It should also be noted that William F. Buckley, himself could have been thought of as "The Great Excommunicator" -- inasmuch as he ousted Ayn Rand and The John Birch Society from the conservative movement.  In so doing, he ensured the movement's survival.  So it could be that this will ultimately be a positive development.
Terry McAuliffe: The Source of Lies That Just Won't Die
Rebecca Downs
Susan Collins Has Some Words About the 'Credibility' of 'Speaker Pelosi's Partisan Committee'
Rebecca Downs