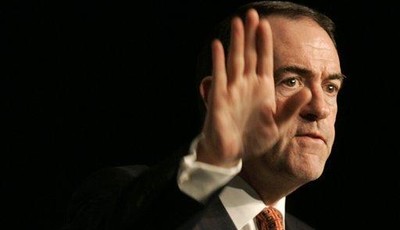 "You shall not press down upon the brow of labor this crown of thorns, you shall not crucify mankind upon a cross of gold."
- William Jennings Bryan

When former Arkansas Governor Mike Huckabee finished a surprising second-place in the Ames Iowa Straw Poll last week, a lot of people started paying attention.  After all, many Republicans are under whelmed by the current crop of frontrunners.  And Huckabee, who has performed marvelously in the debates, seems to be on the verge of top-tier status.

But just when Huckabee should be poised to parlay his Iowa finish into real fundraising (as well as public relations) success, the skilled Arkansas orator and former Baptist preacher from Hope has chosen to position himself in a rather un-conservative way -- as a populist.

On one hand, this seems politically sagacious.  After all, he is seeking to contrast himself to multi-millionaire Mitt Romney.  But it's also a dangerous maneuver, which pitts him against traditionally conservative allies, and has resulted in his often sounding more like Dick Gephardt than Ronald Reagan.

In a recent Wall Street Journal piece, for example, Huckabee attacked hedge funds, saying: “You know, a lot of the folks that are worried now are experiencing maybe a little bit of what the average American worries about every day when they go to work and they’re not sure whether any of these hedge-fund managers and their $100 million bonuses are going to sell off the jobs of the people out there in middle America to China, and they’re going to lose their paychecks and pensions."

This is dangerous talk, inasmuch as traditional conservatives generally view private equity funds, partnerships, and hedge funds favorably.  Most conservatives believe that in attacking these entities, Democrats are seeking to change the rules in the middle of the game -- and punish folks merely for making a lot of money.  So it's surprising to hear a Republican candidate attacking entrepreneurs for being successful (and implying that their success is somehow hurting regular Americans).

In another interview, Huckabee called the fiscally conservative Club for Growth, the “Club for Greed.”  Not good.

In recent decades, class warfare has failed for Democrats, including Gephardt, Gore, and (so far) Edwards, but can Huckabee’s recent rhetoric resonate with disaffected Republican voters?  I doubt it.  Ronald Reagan (who grew up admiring Franklin Roosevelt) certainly had a populist appeal, but it was never about class warfare.  And that's the fundamental problem I have with Huckabee's message.  While I applauded him for his social positions, Huckabee is as wrong about populism as he is right about social issues.

One wonders if he realizes he is really tapping into an old political movement that is most closely associated with three-time presidential loser, William Jennings Bryan.

... Bryan, like Huckabee, was a skilled orator who used religious imagery.  A prohibitionist and anti-Darwinist (interestingly, Huckabee gave the most cogent response to the "Evolution question" during the CNN GOP debate), Bryan called on Americans to fight trusts and big banks.

Come to think of it, when it comes to his political philosophy, Mike Huckabee may owe more to Bryan than Reagan.  And that’s not a good place to be, considering the American people elected Ronald Reagan twice – and rejected William Jenings Bryan three times.