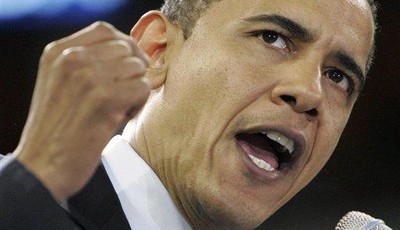 "Statements like this are made and people try to take it out of context and make a great big deal out of it, and that isn't at all what she meant," Obama said.

"What she meant was, this is the first time that she's been proud of the politics of America," he said. "Because she's pretty cynical about the political process, and with good reason, and she's not alone. But she has seen large numbers of people get involved in the process, and she's encouraged."

First off, that's not what she said. Second, is there really nothing in the American political history of the last 25 years that she finds admirable? Not such liberal sacred cows as the vaunted prosperity of the Clinton years? Not a system that moved from Jim Crow to the likes of the Obamas' Ivy League educations in one generation? Not the fact that in history's greatest experiment in representative democracy, power has continued to change hands peaceably and the standard of living has risen unabated while the rest of the world tries to figure out how?I don't think Michelle Obama dislikes America. But her comment reveals that she is among those who think the country is fundamentally a flawed one that can occasionally rise above its faults to do something truly great, like vote for her husband. Many hard-core liberals view the country that way. I know many of them-- those that can't say they love their country without following the sentiment with assurances that they hate President Bush and our racist, sexist past and would never, ever wrap themselves in the flag like simpletons because dissent is the highest form of patriotism, anyway, don'tcha know?The rest of the American electorate (right and left), however, believes the country is a fundamentally good one that can occasionally go astray, and will be very disappointed to learn that the prospective first couple might think differently.You better keep spinning, Barry.
NYT Guest Essay Opinion Piece Claims 'There Is No Good Reason You Should Have to Be a Citizen to Vote'
Rebecca Downs
The Biden Administration Is Suing Greg Abbott for Trying to Protect Texans from COVID Positive Immigrants
Rebecca Downs
Poll Shows There is Shifting Narrative on Jan. 6 Select Committee