Heroes in Blacksburg: Preventing Death and Brushing With It

UNDATED E-mails to the widow of an Israeli engineering professor killed in yesterday's shootings at Virginia Tech say that Liviu Librescu (LIV'-yoo lih-BRES'-koo) saved lives by blocking the doorway of his classroom with his body.

Kevin Sterne's Eagle Scout training saved his own life after a bullet almost severed an artery in his leg:

Dr. David Stoeckle, chief of surgery at Montgomery Regional Hospital, said the student had a 3-centimeter gash in the femoral artery of his right leg:  “He knew he was bleeding to death.”

The student, an Eagle Scout, wrapped a wire cord around his leg to staunch the bleeding, Dr. Stoeckle said.  When emergency medical technicians arrived, they placed a tourniquet belt around the leg and saved his life, the physician said.  The belt can be seen on the student’s leg in the photo.

“He was an incredible guy,”  said Dr. Stoeckle, who declined to name the student because of privacy concerns, although the student was identified later by his parents.
Without the student’s own treatment and the technicians’ action, there’s a good chance he would have died, Dr. Stoeckle said.

The physician said the student is in stable condition and doing very well but added, “I think he’s going to be here a while.”

You may have seen Sterne yesterday: 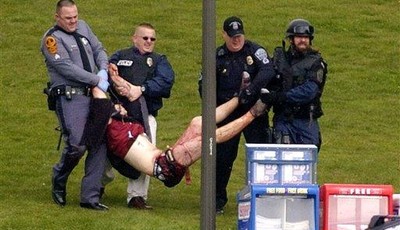 Gene Cole, a janitor in Norris, was on his way to get a co-worker out of the building after he heard there was a shooter nearby, when he had his own run-in with Cho:

He stepped into a second-floor hallway, and a dark figure emerged from a classroom and began firing a gun at him.

“I was looking at somebody else who was already shot,” Cole said. “I was shot at five times. They went right by my head.”

Cole said the shooter, now identified as Virginia Tech student Cho Seung-Hui, pulled a gun and began firing at him as soon as he moved toward the person on the floor.

The shooter, Cole recalled, wore a hat, blue jeans and a sweatshirt-type of garment. Cole could not see the expression on the man’s face, and the shooter said nothing to Cole as he began to fire, Cole said.

Cole said he ran down a back stairway to get away from the gunfire.