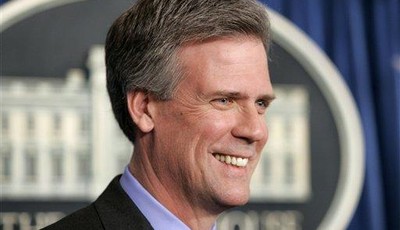 This time, in his liver. After having his entire colon removed in 2005, doctors found a suspicious growth six months ago, which was removed Monday and determined to be malignant.

Doctors determined that it was cancerous, and found during the surgery, which was exploratory, that his cancer had metastasized, or spread, to his liver, White House spokeswoman Dana Perino said.

She said Snow is comfortable and feeling fine after his surgery and has pledged to aggressively fight the disease with an as-yet-to-be-determined chemotherapy treatment course. He will be inthe hospital recovering from the surgery, a major procedure, for about a week.

"He said he's going to beat it again," Perino said in an emotional morning briefing with White House reporters. "When I talked to him, he was in very good spirits."

A Tony Snowism for the press corps even during tough times:

Perino said Snow also gave her some instructions to pass on to reporters: "Tell them not to bug me." He also thanked reporters and others for the outpouring of good wishes he has received.

Keep Snow in your prayers. Liver doesn't sound particularly promising, but I'm sure having to have his entire colon removed didn't sound promising a couple years ago. Allah finds that even Democratic Underground is sympathetic to the Snowman's plight. Glad to hear it.

THE PRESIDENT:  This morning I got a phone call from Tony Snow.  He called me from the hospital.  He told me that when they went in and operated on him they found cancer.  It's a recurrence of the cancer that he thought that he had successfully dealt with in the past.  His attitude is, one, that he is not going to let this whip him, and he's upbeat.  My attitude is, is that we need to pray for him, and for his family.

Obviously, a lot of folks here in the White House worry a lot about their friend, as do Laura and I.  And so my message to Tony is, stay strong; a lot of people love you and care for you and will pray for you.  And we're hoping for all the best.  I'm looking forward to the day that he comes back to the White House and briefs the press corps on the decisions that I'm making and why I'm making them.  In the meantime, I hope our fellow citizens offer a prayer to he and his family.

Update: The courageous HuffPo 'Deathwatch for Freedom' continues. How could such a liar not have cancer?