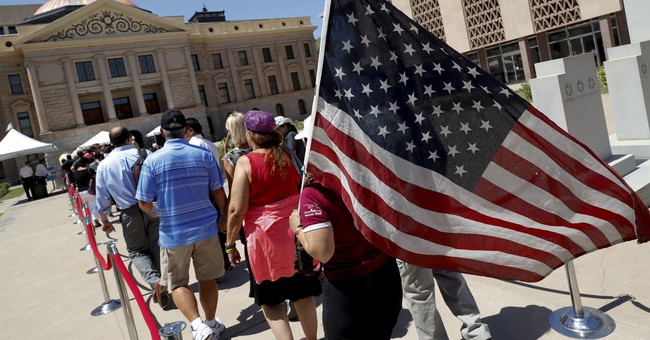 Democrats would like to think that Arizona is turning blue. But if Tuesday’s primary election is any indication, conquering the home of Barry Goldwater might not be as easy as it once seemed.

Last week, Townhall reported that PACs like Unite America, a progressive group backed by billionaire Biden supporter Kathryn Murdoch, was targeting red-district races between conservative and moderate candidates. By funneling hundreds of thousands of dollars toward the more liberal candidate, such groups sought to flip the state blue from the bottom up. But in District 15, conservative values triumphed over unprecedented levels of spending by out-of-state organizations. Conservative Senate candidate Nancy Barto soundly beat moderate incumbent Heather Carter in what was arguably the nastiest, most expensive race in the state. Barto doesn’t have a general election opponent, guaranteeing her a spot in the State Senate.

In her victory statement, Barto thanked her constituents for making an effort to “understand the times, to consider the issues we stand for, and come out and vote.” Center for Arizona Policy Action, a family values organization that endorsed Barto, said the win was evidence that Arizona voters “rejected the notion that they have no choice but to move to the left.”

Likewise, conservative State House candidate Justin Wilmeth overcame the thousands of dollars Unite America funneled to his opponent. In fact, all but one of the conservative candidates the group attacked beat their moderate opponent. Steve Montenegro, a former Arizona state legislator who had previously been accused of inappropriate text messaging with a staffer, lost his race to Unite America-candidate Joanne Osborne, but only by 375 votes. Such success wasn’t the case for conservatives targeted by the PAC in states like Colorado and Virginia, who recently lost their primaries to liberal Republicans.

In Arizona’s race for Corporation Commission, which regulates public utilities, Republican Jim O’Connor accomplished the near-impossible feat of securing more than four times the number of write-in votes needed to appear on the general election ballot, giving the GOP a full slate of candidates come November. In a Facebook Live event Wednesday, Arizona GOP Chairwoman Kelli Ward said Democrats played some “shady legal games” to kick Republicans off the ballot, noting that O’Connor’s comeback was “almost unheard of.” O’Connor credited precinct committeemen and Republican club members across the state for getting the word out and raising more than $2,000 in $5 donations, but he warned that California liberals are pouring millions into the race to push green policies.

“We’re at risk in this state,” he told Ward. “If everything else turns Republican except the control of the Corporation Commission flips to three Democrats, and that’s possible. . . we’ll have a Nancy Pelosi Green New Deal in Arizona and the governor can’t do anything about it and the legislature can’t do anything about it. It’s a big risk, so people need to pay attention.”

The primary that garnered the most attention, however, was the race for Maricopa County Sheriff. For days, legendary former Sheriff Joe Arpaio stood neck-and-neck with his former Chief Deputy Jerry Sheridan, who many view as a carbon copy of Arpaio. The liberal media was quick to celebrate Sheridan's ultimate victory over Arpaio on Friday, but it’s worth acknowledging Sheriff Joe’s strong showing. Despite being ousted by current Sheriff Paul Penzone in 2016 and facing jail time for contempt of court until being pardoned by President Trump, Arpaio came within 6,000 votes of receiving the GOP nomination. That came as a shock to those who view the sheriff's tough-on-crime record "racist."

How does Arizona come THISCLOSE to electing a racist criminal like Joe Arpaio as their sheriff? AGAIN???

Not to break into hockey twitter with a brief political tweet, but so far over 120,000 Arizona GOP members have voted for Joe Arpaio - a man who was literally convicted in federal court - to run for Maricopa County sheriff. I am floored by this in the worst possible way.

There’s a big difference between a primary and a general election, and anything can happen by November. But Republicans are steadily gaining ground: from April 2020 to July 6, 2020, Republicans registered 3,000 more new voters in the state than Democrats did, reversing a recent trend that had previously given Democrats an edge on registrations. The Arizona GOP has approximately 97,000 more voters registered than Democrats. Trump won the state with a 3.5 percent margin in 2016.

As the general election nears, Arizona will likely see another massive influx of outside dollars and activism as leftist groups seek to flip the state. But Tuesday’s triumph of conservative candidates should give Republicans reason for optimism — both in the Grand Canyon State and beyond.

CORRECTION: This article has been updated to clarify the situation surrounding Montenegro's campaign.