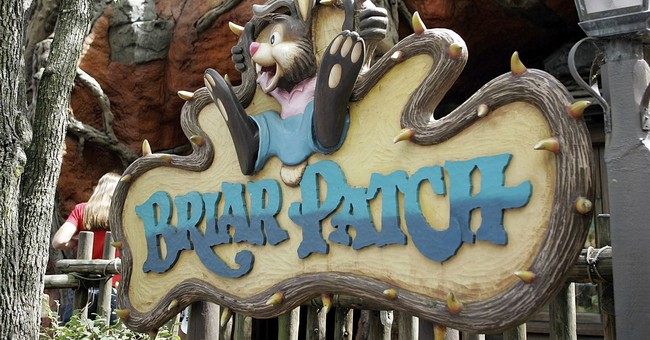 Nobody’s going to have a ‘laughing place’ anymore thanks to internet social justice warriors.

Disney has announced it will be retheming the Splash Mountain ride in both Disneyland and Disney World to “The Princess and the Frog,” a 2009 animated film featuring Disney’s first black princess.

We're thrilled to share Splash Mountain at Disneyland & @WaltDisneyWorld will be completely reimagined with a new story inspired by an all-time favorite @DisneyAnimation film, “The Princess and The Frog.” Learn about what Imagineers have in development.

Splash Mountain has been a park staple since it opened in 1989. The ride is based on characters from the 1946 film "Song of the South," which was inspired by Br’er Rabbit from the Uncle Remus stories, the fictional title character and narrator of a collection of black American folktales. Despite being set in the post-Civil War South, the film has long been derided for promoting racial stereotypes and glorifying plantation life. Because of this, Disney has never released the movie on any home video format. But while the ride incorporates some of the songs (including "Zip-a-Dee-Doo-Dah," which won the film an Academy Award), settings, and animal characters from the film, it diverges in plot and leaves out the racial tropes that made the movie controversial.

The news comes on the heels of an online Change.org petition calling on Disney to “remove all traces of this racist movie” by reimagining the ride with a “Princess and the Frog” theme. At the time of this writing, the petition had garnered more than 21,000 signatures.

In a post on the parks’ official blog, the company said the change is part of Disney’s tradition of constantly evolving and telling fresh, relevant stories.

“[W]ith this longstanding history of updating attractions and adding new magic, the retheming of Splash Mountain is of particular importance today,” wrote Michael Ramirez, public relations director for Disneyland Resort. “The new concept is inclusive – one that all of our guests can connect with and be inspired by, and it speaks to the diversity of the millions of people who visit our parks each year.”

Caving to social pressure is nothing new for Disney. In response to the #MeToo movement in 2018, Disney changed the “bride auction” scene in the Pirates of the Caribbean ride, which featured several female characters lined up beneath a sign that read “Wenches for Sale,” to a scene depicting pirates auctioning off a village’s plunder. And in a stroke of irony, Disney cowed to the Chinese Communist Party’s demands that they minimize or remove all non-white characters from the “Star Wars: The Force Awakens” posters in China. The company shrunk down the picture of one of the main characters, black actor John Boyega, until he was barely visible, a move that sparked outrage across the internet.

Disney hasn’t given a timeline for when construction will begin or set an opening date. In the meantime, park fans are left wondering what the mob’s next victim will be. Fantasyland’s Peter Pan ride because of its cliché portrayal of Native Americans? “It’s a Small World” for perpetuating cultural stereotypes?  “The Enchanted Tiki Room” for insensitivity to ethnic minorities?

Don’t give them any ideas.