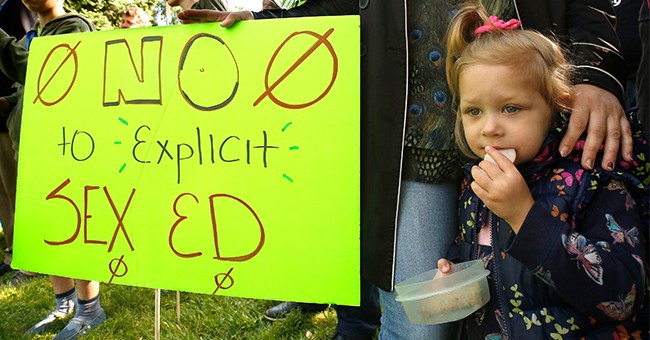 The National Education Association is reportedly equipping teachers in Ohio with QR-code badges that direct students to how-to guides promoting “non-binary” gender identities, “queer sex,” and the idea that “transgender men” can become pregnant, among other things.

Conservative writer Christopher Rufo shared the findings on Wednesday. He noted that local news outlet ABC 6 reported that the National Education Association and the Hilliard Education Association in Ohio have been equipping staff in the school district with QR code badges that direct people to the NEA’s LGBTQ+ Caucus website. They are provided with resources from “gender activist” organizations, including The Trevor Project, Scarleteen and Sex, Etc.

"If you are not a safe person or do not support LGBTQ+ youth or issues, please do not wear or display the 'I’m Here' badge," the NEA LGBTq+ Caucus website reads.

On Rufo's website, he described what is included in the guides pushed by the NEA's LGBTQ+ Caucus.

Rufo shared images from some of the “sex guides” on Twitter.

According to local news reporting, the National Education Association and its local affiliate in Hilliard, Ohio, have been providing staff in the Hilliard City School District with the QR code-enabled badges, which point to the "NEA LGBTQ+ Caucus" website.https://t.co/UF1W8rCyJt pic.twitter.com/LGZXojtg0T

On Twitter, Rufo also noted that the NEA is the largest teachers union in the country, representing over 3 million teachers in public schools across America. He called for the abolition of teachers' unions.

The NEA is the largest teachers union in the country, representing more than 3 million public school teachers in all 14,000 local school districts. And they're actively promoting resources for "putting a fist or whole hand into a person's vagina or bum." Disgraceful.

Public school students in Ohio are going to class and some of their teachers are wearing an NEA-sponsored badge that links to a how-to guide on "putting a fist or whole hand into a person's vagina or bum."

It's way past time to abolish the teachers unions.

ABC 6 noted in its report that parents in Hilliard, Ohio, are “ready for a showdown” over the material being promoted by the NEA.

Lisa Chaffee, a Hilliard parent who is with Ohio Parents Rights in Education, told the outlet that the QR code posted in her child’s school “takes you to a website that has extremely inappropriate information, and as a parent that crosses the line, said she checked out the website, and the content is nothing kids should access.

A statement from Hilliard Superintendent Dave Stewart claimed that the QR code “is not there to be shared with students; rather, it is provided to adults by the NEA should they be interested in learning more about LGTBQ+ issues and supporting LGBTQ+ students.”

This week, Virginia’s Department of Education put forth new guidance surrounding parental involvement in schools. Schools are forbidden from keeping parents out of conversations about students' gender identity, and parents are allowed to review any school material on sex ed.

“Parents have the right to review the complete family life curricula, including all supplemental materials used in any family life education program,” the guidance stated. It added that the policies were drafted with parents’ rights in mind.