After ‘Disappointing’ Trials, Pfizer Vaccine Could be Soon Be Available for Children Under 5 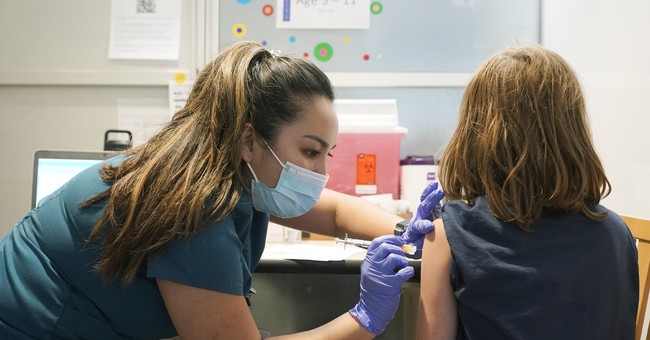 Pfizer and its partner BioNTech are expected to submit a request to the U.S. Food and Drug Administration (FDA) this week for Emergency Use Authorization (EUA) for their Wuhan coronavirus vaccine for children 6 months to 5 years old, The Washington Post reported.

Sources briefed on the matter told the Post that the FDA urged Pfizer and BioNTech to submit the application so that vaccine regulators could review the data. This comes after the companies saw hiccups late last year regarding the levels of protection their two-dose vaccine produced in this age demographic.

“The companies [Pfizer and BioNTech] in the last few months have been testing a third dose, following disappointing results for the two-shot regimen showing that while the vaccine is safe, two doses did not provide a strong enough immune response in all age groups. But data on a third shot will not be available until at least late March. Once that information is submitted, regulators are expected to authorize a third dose of the pediatric vaccine,” the Post reported.

One of the people familiar with the situation told the Post, “we know that two doses isn’t enough, and we get that,” but that “the idea is, let’s go ahead and start the review of two doses. If the data holds up in the submission, you could start kids on their primary baseline months earlier than if you don’t do anything until the third-dose data comes in.”

The Post added that an official from the Biden administration said there is consensus among health officials in “seeing this move forward,” referring to the plan by Pfizer and BioNTech to submit an application to the FDA.

In a briefing last week, federal officials, including President Biden’s Medical Chief Adviser Dr. Anthony Fauci, reportedly saw updated trial data regarding the vaccine in children six months old to age 5. In November, as I covered, Fauci said in an interview with Business Insider that the vaccine would “likely” be available for toddlers and babies down to six months of age in the first quarter of 2022.

However, in December, an announcement from Pfizer indicated that trials of its vaccine in children 2 to 5 years old did not produce the level of protection that was expected. The announcement stated that the trials would be “amended” to include evaluating a third vaccine dose at least two months after the second dose of the initial two-dose series to provide “high levels of protection” for this age demographic.

Additionally, the announcement claimed that the FDA already “endorsed and agreed” to the changes in the trials for the vaccine, a possible foreshadowing of the administration’s approval for EUA for children 5 and under.

“If the three-dose study is successful, Pfizer and BioNTech expect to submit data to regulators to support an Emergency Use Authorization (EUA) for children 6 months to under 5 years of age in the first half of 2022,” the announcement stated.

Last fall, the FDA approved EUA for the Pfizer-BioNTech two-dose vaccine for 5 to 11 year olds. Days after, The New York Times published a story highlighting parents' worries regarding getting their children vaccinated against the virus.

Michelle Goebel, a mother of three children ages 8 and under, “expressed worry about the risks for her children, in part because of the relatively small size of children’s trials and the lack of long-term safety data so far. She said the potential risk from a new vaccine seemed to her to outweigh the benefit, because young children have been far less likely than adults to become seriously sick.”

Another parent, Rene LaBerge, told the Times “I don’t want my son to take something that is unsafe,” but added, “I believe Covid is dangerous. There aren’t any good easy answers here.”

A survey conducted by the Kaiser Family Foundation found that only 27 percent of parents were “eager” to vaccinate their 5 to 11 year old children, while 30 percent said that they will “definitely” not vaccinate their 5 to 11 year old children. Thirty-three percent said they would wait and see how the vaccine is working before getting their children vaccinated.

A previous report from the Times in August noted that federal regulators urged two COVID-19 vaccine manufacturers, Pfizer and Moderna, to expand the size of their studies on children ages 5 to 11 to “detect rare side effects including heart inflammation problems that turned up in vaccinated people younger than 30.” As Townhall covered, several European countries have restricted the Moderna vaccine due to cases of myocarditis arising from it.

In September, two top FDA vaccine regulators, Dr. Marion Gruber and Dr. Philip Krause, departed their roles due to the Biden administration’s push for booster shots for the general public, which “disrupted” its work on other developments, such as recommending COVID-19 vaccines for children.