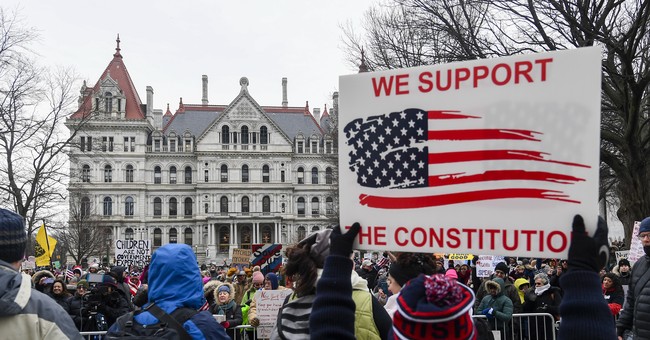 A federal judge in Texas temporarily blocked the Biden administration from enforcing a Wuhan coronavirus vaccine mandate on federal employees. This comes after the Supreme Court struck down Biden’s vaccine mandate on large private businesses, which Katie reported.

According to Fox News, Judge Jeffrey Vincent Brown of the U.S. District Court for the Southern District of Texas ruled against the administration on a vaccine mandate affecting federal employees. Brown, who was appointed by former President Donald Trump, argued that the Biden administration does not have the authority to enforce a vaccine mandate "with the stroke of a pen and without input from Congress."

"While vaccines are undoubtedly the best way to avoid serious illness from COVID-19, there is no reason to believe that the public interest cannot be served via less restrictive measures than the mandate, such as masking, social distancing, or part- or full-time remote work," Brown wrote Friday. "Stopping the spread of COVID-19 will not be achieved by overbroad policies like the federal-worker mandate."

Brown cited the Supreme Court’s decision this month to block the Biden administration’s vaccine mandate requiring businesses with 100 or more employees to require vaccines for their workers.

"The Supreme Court has expressly held that a COVID-19 vaccine mandate is not an employment regulation. And that means the President was without statutory authority to issue the federal worker mandate,” Brown continued.

"It is not even about the federal government's power, exercised properly, to mandate vaccination of its employees," he added. "It is instead about whether the President can, with the stroke of a pen and without the input of Congress, require millions of federal employees to undergo a medical procedure as a condition of their employment. That, under the current state of the law as just recently expressed by the Supreme Court, is a bridge too far."

Fox’s report notes that Friday’s ruling “is not a final ruling on the policy. It simply blocks the mandate from being enforced while the litigation is pending.” The Department of Justice (DOJ) immediately appealed the decision to a circuit court. A ruling from the Fifth Circuit Court of Appeals could be appealed to the United States Supreme Court.

CNN noted that an organization called Feds for Medical Freedom filed the lawsuit in December. Reportedly, the group includes 6,000 members who are employees or contractors for “nearly every federal agency.”