Jim Jordan: ‘We Definitely Are’ Investigating Fauci if Republicans Win Back the House in 2022 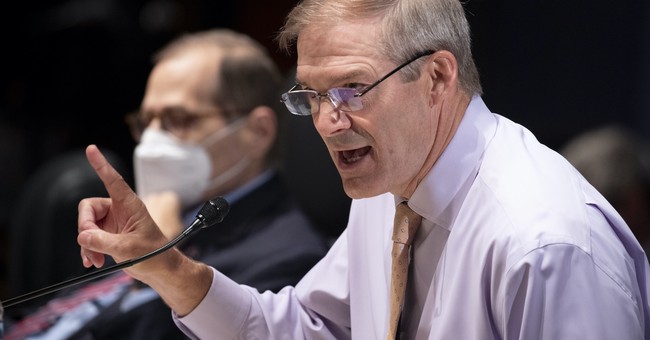 GOP Rep. Jim Jordan, from Ohio, said in an interview this week that he is going to investigate President Biden’s Chief Medical Advisor and Director of the National Institute of Allergy and Infectious Diseases (NIAID), Dr. Anthony Fauci, over his knowledge of the origins of the Wuhan coronavirus if Republicans win back the House.

Jordan made the remarks on Fox News with Maria Bartiromo on Sunday. In the interview, Jordan discussed his intentions to investigate Fauci if Republicans take back the House in the 2022 midterms and criticized the Biden administration’s handling of the pandemic.

“Are you going to investigate Anthony Fauci should you take the control and the majority of the House?” Baritoromo asked.

“If the American people put us back in charge, we are definitely going to do this. Because, we now know without a doubt that Dr. Fauci knew on Jan. 31 and Feb. 1 that this thing [coronavirus] came from a lab. The top scientists in the country were saying it came from a lab,” Jordan said in the interview. He noted that the scientists who believed the virus came from a lab then changed their position and wrote an article for Nature Medicine Magazine that suggested the virus did not come from a lab.

In the interview, Jordan slammed the Biden administration’s strategy to combat the pandemic. Jordan explained that his administration is about “power and control” and that they’ve messed up “every single thing.”

“It’s about power and control. It’s certainly not about the science, it’s certainly not about the truth. It’s certainly not about the facts. It’s about power and control. And it’s just one more thing that they’ve [the Biden administration] done wrong. I mean, frankly, I don’t know that they’ve done anything right. The Quinnipiac poll had his approval rating at 33 percent. I think the real question is, who are these 33 percent? Who are the people who actually think he’s doing a good job? They’ve messed up every single thing. You think about the message that they’re sending to families. Particularly, in urban areas, where they’re saying, ‘we’re not going to let your kids go to school, we’re going to let bad guys roam the street, and oh by the way, we’re also going to let illegal immigrants vote.’ That’s the message they’re sending. No wonder no one approves of what this administration is doing,” Jordan said.

Joined @MariaBartiromo on Fox News this morning. Give it a watch. https://t.co/yxqQCcezQ6