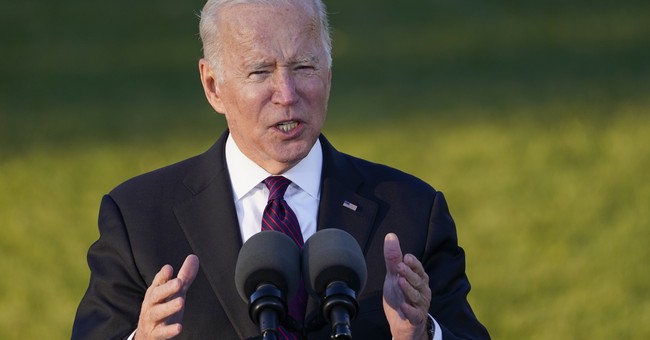 Still, the poll found that more registered voters believe large corporations and China bear some responsibility for the supply chain issues, at 63 percent and 64 percent, respectively.

Overwhelmingly, 74 percent of voters said the top driver of the supply chain problems are worker shortages and 79 percent blame the COVID-19 pandemic.

This month, Biden issued remarks from the Port of Baltimore to tout his $1.2 trillion infrastructure bill. During his remarks, he touched on inflation and the supply chain, saying that people “remain unsettled about the economy” because “everything from a gallon of gas to a loaf of bread costs more.” He suggested that the infrastructure bill could be “progress” to get the economy back on track.

In his remarks, Biden said his administration “has a plan to finish the job of getting us back to normal from the pandemic and having a stronger economy than we ever had before.”

“The challenge we need to meet here, and that my plan is going to help address, has to do with the supply chain,” he continued. “And as long as goods and materials are getting where they need to go on time, there’s usually no need to worry about the supply chains. But when global disruptions hit, like a pandemic, they can hit supply chains particularly hard. COVID-19 has stretched global supply chains like never before.”

To continue, Biden stated that the bill is a “major step forward” for fixing supply chain bottlenecks.

“This Bipartisan Infrastructure Bill is a major step forward. It represents the biggest investment in ports in American history.  And for American families, it means products moving faster and less expensively from factory floor, through the supply chain, to your home,” Biden said. “The bottom line is this: With the bill we passed last week and the steps we’re taking to reduce bottlenecks at home and abroad, we’re set to make significant progress.”

Additionally, the poll found that 52 percent of voters say a candidate’s position on supply chain and delivery issues will be a “major” factor when they vote in the midterm elections next November.

This week, a separate poll found that Americans’ worries about the economy have risen to a record high since the pandemic began, as I covered. This poll found that inflation, unemployment, and the economy in general as the top issues impacting the United States.

Another poll released this week, conducted by Yahoo News and YouGov, found that a majority of registered voters, 57 percent, blame Biden for inflation. Seventy-seven percent of respondents in the poll said that inflation is affecting their lives as the holiday season begins. A mere 18 percent of respondents said Biden is doing enough to address it.