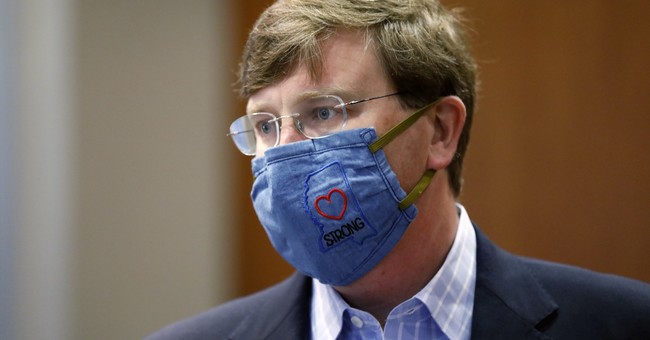 In an interview on Sunday, Mississippi Gov. Tate Reeves (R) blasted President Biden’s vaccine mandate on workers, describing it as an “attack” on everyday Americans and noted that the president is exercising “unilateral” authority by doing so.

On CNN’s “State of The Union" with Jake Tapper, Reeves criticized Biden’s vaccine mandate and responded to reports that Mississippi leads the country in Wuhan coronavirus deaths.

“The question here is not about what we do in Mississippi, it's about what this president is trying to impose on the American worker,” Reeves said in the segment.

“The reality is, this is an attack by the president on hard-working Americans and hard-working Mississippians who he wants to choose between getting a jab in their arm and their ability to feed their families,” Reeves added. “The president does not have the authority to do this. He knows he doesn’t have the authority to do this, in my opinion. But, he wants to change the political narrative away from Afghanistan and away from the other issues that are driving his poll numbers into the ground and focus on anything, particularly a political fight, other than those issues.”

In the 11-minute segment, Tapper repeatedly pressed Reeves on his response to the Wuhan coronavirus, noting that Mississippi reportedly leads the nation in COVID-19 deaths per capita, and said if the state were a country, it would rank second in the world in COVID-19 deaths.

“Over 9,000 Mississippians have passed away with covid, and every single one of them breaks my heart. It is a very difficult situation that we as Mississippians and we as Americans find ourselves in,” Reeves responded.

“But we also have to understand as we look forward, if this president has the ability to mandate vaccines, what powers do we not grant this president? What does he not have the ability to do?” Reeves continued. “The fact is, if we give unilateral authority by one individual to do anything that he wants to do – whether its a jab in the arm or anything else – then this country is in deep deep deep trouble. That’s not something that I’m willing to stand by and allow him to do.”

Earlier this month, Biden announced a slew of vaccine mandates that would require private companies with 100 or more employees to require workers to be vaccinated against COVID-19. Reeves and several other GOP governors have spoken out against the mandate, some even threatening legal action. Republican lawmakers and attorneys general have vocalized their dissent. As we reported, Arizona Attorney General Mark Brnovich filed a lawsuit against the mandates last week.

"If Mississippi were its own country, you would be second in the world only to Peru in terms of deaths per capita... With all due respect, governor, your way is failing." CNN's @jaketapper presses Mississippi GOP Gov. Tate Reeves on the state's Covid-19 death rate. #CNNSOTU pic.twitter.com/jtbp7XbrKs