Sen. Rand Paul Speaks to Young Adults About Liberty: 'This Is the Best Time to Be Alive' 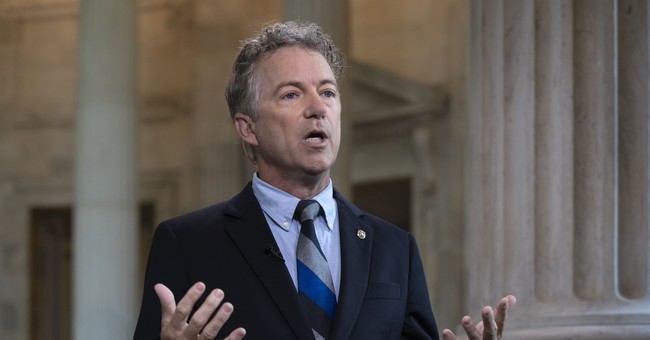 On Wednesday, The Fund for American Studies (TFAS) hosted Sen. Rand Paul (R-KY) as part of the 2021 Capitol Hill Lecture Series, which is an educational opportunity for interns in Washington D.C. to hear from prominent speakers who work on the Hill and other areas of politics.

Paul, a Pennsylvania native, spoke to the interns about liberty, which is the primary thematic element that is woven through all the speakers featured at these events. In his 30-minute speech, Paul highlighted the benefits of capitalism, the COVID-19 vaccine, and the downfalls of socialism. Members of the audience had the opportunity to ask the senator questions after.

“This is the best time to be alive,” Paul said to the crowd. “There’s never been a better time.”

Paul began by deep-diving into the benefits of capitalism and the drawbacks of transitioning into a socialistic society. He emphasized the atrocious outcome of socialism in Venezuela, where citizens have resorted to drastic measures to attain basic necessities, such as eating pets for nutrition.

“It’s amazing what they’ve done to a rich and great country,” Paul said.

To elaborate, Paul dismantled the argument perpetuated by leftists that socialist countries like Sweden are a safe haven the United States should copycat. While proponents of socialism utilize Sweden as the beacon of “Bernie” socialism, complete with government subsidies like free healthcare, Paul described that their argument is mistaken, as Sweden began the transition out of socialism decades ago.

“The most humanitarian system ever conceived is capitalism,” Paul said. He said that’s why illegal immigration in United States is a current national crisis. “They want to come here for what we have. We need to appreciate it.”

Throughout his speech, Paul staunchly upheld that socialism is a system that has failed countless times and that capitalism is the best system to holistically benefit all aspects of society. He also recommended that citizens weigh the benefits of going to the state level to pass legislation to better society rather than beelining straight to the federal government.

“Nobody asks if it should be done at the federal level or the state level,” Paul said.

Paul acknowledged that government-funded social programs to fix societal programs can be mismanaged. So, he suggested that if taxpayers had more money in their pocket, they could write a check to the source they believe would be the most effective in solving an issue. Likely, people would opt to give their funds to a private company versus the federal government.

“The people spending the composite of the money are never very good at it,” Paul said.“Nobody spends somebody else’s money as wisely as their own.”

He took his point a step further, explaining that giving money to private entities rather than the federal government could help create an upturn in fixing societal problems.

“Who does the functions that we need in society better?” Paul said. “The government or the private marketplace?”

Paul briefly touched on COVID-19, explaining how masks and vaccinations should be a personal choice. This is timely, as a slew of universities are now requiring returning students to be vaccinated before attending in the fall and many places still require individuals to wear masks.

“In a free society, we would all make these decisions ourselves,” Paul said. “You would make your own healthcare decisions.”

To wrap up, Paul emphasized one thing: “No other economic system helps people the way capitalism does,” Paul said. “Capitalism is the most humanitarian system ever conceived by man.”