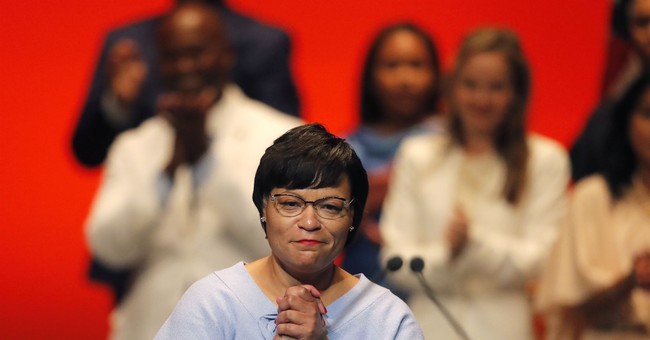 A new, two-story afro pick statue was unveiled in New Orleans on Friday in honor of Juneteenth, but while Mayor LaToya Cantrell called the structure “breathtaking,” not everyone sees it that way.

"As Juneteenth approaches, we celebrated with an unveiling in Lafayette Sq," Cantrell tweeted about the 24-foot tall hair pick that has a clenched “black power” fist on top. "This sculpture is very fitting for this time & place as we celebrate the freedoms that we have gained We know that it doesn’t come without struggles, fights, and protests for 200+ years."

The imposing pick is part of the Monumental Tour, a traveling exhibition of large-scale outdoor works by Black artists. Others in the exhibit are:

The exhibit website says the three sculptures were provided by New Orleans Office of Cultural Economy, the Essence Festival of Culture and the Kindred Arts organization. The sculptures arrived in time for Juneteenth celebrations this weekend and will remain in place through the 2022 Essence Fest, June 30 to July 3, and depart to their next destination after July 12. (NOLA)

The display, "All Power to All People," was created by artist Hank Willis Thomas.

As Juneteenth approaches, we celebrated with an unveiling in Lafayette Sq.????????
This sculpture is very fitting for this time & place as we celebrate the freedoms that we have gained

We know that it doesn’t come without struggles, fights, and protests for 200+ years pic.twitter.com/QcwFElDETN

Furthermore, in recognition of our local black and brown artists, we have dedicated $7.2 MILLION in bond funding to public art??

??In addition, we have already purchased over 60 pieces of artwork created by local Black artists to be displayed in our public buildings???? pic.twitter.com/Dlw35fXV4j

The city is spending more than $7 million to recognize "local black and brown artists," Cantrell said, noting that the finished products will be displayed around public buildings. A spokesperson for the mayor's office declined to say how much the giant afro pick cost taxpayers, however.

The City of New Orleans just unveiled a giant sculpture of an Afro pick. This is a joke, but it’s not supposed to be. How humiliating for a city that has given humanity so much great culture. https://t.co/GBc52wTQpM

Imagine being mayor of a major city, spending money on a monument that depicts the accomplishments of black people, and deciding on a hair pick. They would recall a white mayor for demeaning us. Instead, we'll shout "Yaass Queen" and pretend nothing is wrong. https://t.co/pyVJpqWE6M

Nothing says national decline like the statues taken down in New Orleans and what replaced them. pic.twitter.com/99nKp0azoL

Her awful leadership is absolutely devastating for those with a history and love for this city. pic.twitter.com/ggSNK9zh3l

An Afro pick is the best image you could think of to represent the hardships/struggles that African Americans have endured for hundreds of years??? ??