Is the US Ambassador to the UN Serious About This Statement to Taliban? 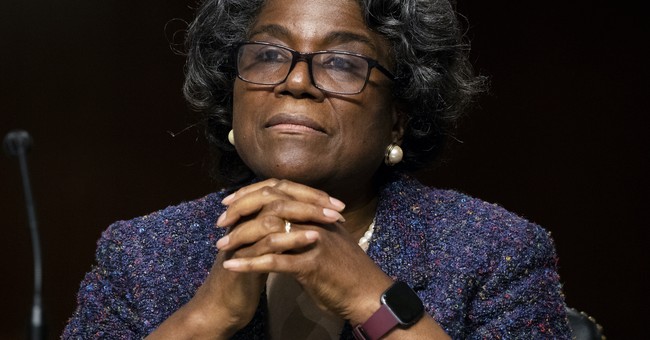 Even a casual observer of the United Nations knows the international body is a joke. So U.S. Ambassador to the United Nations Linda Thomas-Greenfield boasting about her sternly-worded letter to the Taliban—yes, Islamic jihadists—can’t possibly come as a surprise, can it?

Speaking to CNN’s Wolf Blitzer on Tuesday, Thomas-Greenfield said the Taliban is being closely watched.

"We are hearing from people in Afghanistan that they are getting threats from the Taliban, and we have expressed in no uncertain terms here at the United Nations through a very strongly worded press statement from the Security Council that we expect the Taliban to respect human rights, including the rights of women and girls," she said.

"We have also indicated that they have to be respectful of humanitarian law and that we do not expect to see that Afghanistan will become a safe haven for terrorists. But, again, it is not their words that we will hold them to. It is their actions that we will be watching,” the ambassador added.

???? Ambassador Linda Thomas-Greenfield says U.S. expressed "in no uncertain terms" at the United Nations through "a very strongly worded press statement" from the Security Council that "we expect the Taliban to respect women's rights" and "to be respectful of humanitarian law." pic.twitter.com/32TEyRFu4O

Sen. Tom Cotton and many others couldn’t believe she was serious.

Oh yea…The Taliban cares about a “strongly worded press statement.” We live in the stupidest of regimes. https://t.co/Wk4GaOmCXQ

A “very strongly worded press statement” should be all the Taliban needs to follow norms. They’ll probably see it here on @Twitter anyway. ????? https://t.co/XRsPpRB48Y

This is a weak and fundamentally unserious administration. https://t.co/VzFZmKYCPV

Since taking Afghanistan, the Taliban has already killed a woman for failing to wear a burqa, they've beaten Afghans, including women and children, trying to get to the airport, and they reportedly fired into a crowd of protesters, killing at least two and injuring a dozen others.