Biden During Meeting About Florida Condo Collapse: 'You Know What's Good About This...' 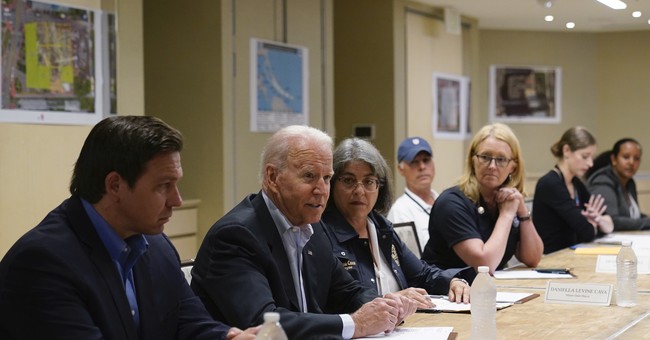 During a meeting Thursday near the site of the Florida condo collapse, President Biden took a moment to highlight what he considered to be a silver lining.

“You know what’s good about this?” Biden said during a briefing with Gov. Ron DeSantis and other local leaders. “We’re letting the nation know we can cooperate — and when it’s really important.”

“We’re coming together. This is life and death,” he continued. “I just got back from 12 days in Europe. They wonder whether we can do this. And you’re doing it. I mean, just the simple act of everybody doing whatever needs to be done. You know it really makes a difference.”

Not the time to say "You know what's good about this?" pic.twitter.com/xqner5KRxq

At least 18 people are dead and 145 people are still missing, though as the rescue effort stretches on, hope that any more will be found alive is fading. Biden, who spoke with families of the missing for nearly three hours, acknowledged this point during his trip.

"They know that the chances are, as each day goes by, diminish slightly. But, at a minimum, they want to recover the bodies," he said.

While many argued Biden meant well with his remark during the meeting with local leaders, the comment has been criticized by others as either ill timed or completely inappropriate.

Nothing is good about this

Hell of a thing to say while over 100 people are still trapped under rubble. https://t.co/U5ZFy8lVC6

Completely tone deaf and out of touch statement https://t.co/PfNopzjhhk