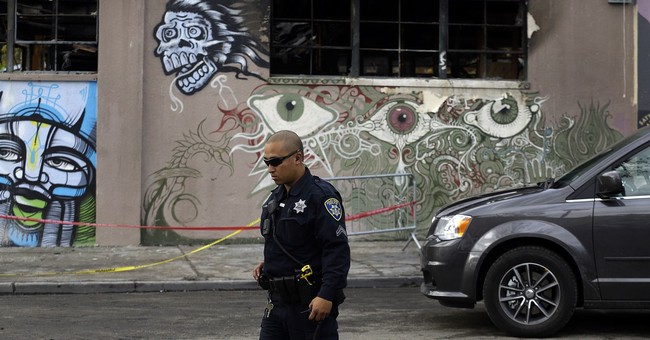 “Out of control” crime in Oakland was on full display Monday as two armed robbers held up a news crew that was interviewing the city’s director of violence prevention outside City Hall.

The hold-up came hours after the police chief spoke about skyrocketing crime, which comes as the Democrat-run city defunded nearly $18 million from the police budget. Much of that money will now go to supporting policing alternatives through the city’s department of violence prevention.

Oakland Police Chief LeRonne Armstrong speaks about rising crime in his city and the city council cutting millions away from his department’s budget:

“Today, we find ourselves in a crisis…Crime is out of control in the city of Oakland.”pic.twitter.com/lcZ9kbNUFN

Oakland police reported that the two suspects approached the newscasters at 3:09 p.m. and tried to steal a camera. After a scuffle, a security officer pulled out a gun and ordered the suspects to leave. They fled without the camera. No injuries were reported.

A statement from the Police Department described the incident but did not identify Guillermo Cespedes, head of the city’s Department of Violence Prevention, as a victim.

Cespedes told The Chronicle he was at the scene of an attempted robbery on Monday, and a police watch commander confirmed he was being interviewed when the crime occurred.

“Our colleagues were conducting an interview at Oakland City Hall when they were approached by two armed individuals,” Liza Catalan, a spokesperson for NBC Bay Area, said. “Thankfully our colleagues are safe and unharmed.” (San Francisco Chronicle)

According to the SF Chronicle, homicides in Oakland have nearly doubled since last year. The city is not alone, however. Crime is rising in major Democrat cities across the country.