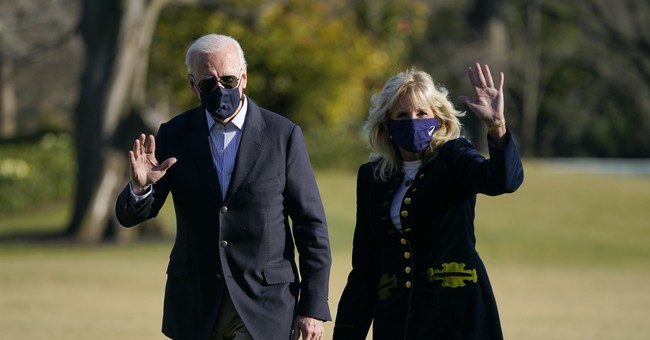 During a tour of a reopened Virginia elementary school, children gave President Biden and the first lady very honest assessments about the pros and cons of virtual learning.

Telling the kids that the first lady teaches full time, Biden then asked how they liked remote learning.

“It was terrible,” one boy told the Bidens, while another said the glitches made it difficult at times but she “definitely” preferred it this way.

Other students noted that while their teacher wasn’t paying attention they could sneak in some snacks.

“If we were really tired we could take a little nap,” another said.

The first lady, who teaches at community college in northern Virginia, laughed and noted that she’s seen that happen as well.

“You just turn off the camera. I've seen that,” she said.

A fifth grader also said being behind the screen allowed them to fake technical glitches to get out of responding: "If you don't know the question, you can just pretend like your mic doesn't work."

Remote learning was a disaster for students not only academically, but physically and mentally as well.

A separate survey of parents by the Centers for Disease Control and Prevention, meanwhile, found that parents of children who learned virtually reported worse outcomes for their kids on 11 of 17 stress and well-being indicators compared to kids who went to school for in-person instruction.

"Findings suggest that virtual instruction might present more risks than does in-person instruction related to child and parental mental and emotional health and some health-supporting behaviors," the CDC authors wrote. (Fox News)

The Bidens were at the Yorktown Elementary School on Monday as part of their efforts to sell the education provisions in his $1.8 trillion American Families Plan.