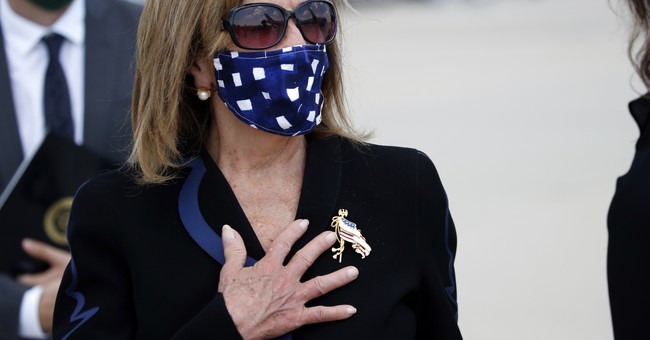 Pro-Trump rioters who breached the Capitol Building on Wednesday smashed doors and windows and vandalized and looted offices, including House Speaker Nancy Pelosi’s.

One individual was seen in photographs sitting at the speaker’s desk with his legs up. The man, 60-year-old Richard Barnett, later posted a photo of himself holding what he had taken and said he left her a "nasty" message.

I guess the authorities won't have a hard time finding Richard Barnett of Gravette, Arkansas, who boasted about looting @SpeakerPelosi's office. @AllMattNYT https://t.co/j0bG21u5F6

“I wrote her a nasty note, put my feet up on her desk,” said Mr. Barnett, who goes by the nickname Bigo. He was brandishing an envelope with the speaker’s letterhead that he had taken from Ms. Pelosi’s office. He insisted he had not stolen it — “I put a quarter on her desk.”

Mr. Barnett continued: When the police came in with pepper spray, “I said, ‘I paid for this, it’s mine,’ and I left.” His face was puffy from being hit with pepper spray, but he was laughing as he entertained fellow protesters with his tale.

His account was backed up by a picture later posted on social media that showed Mr. Barnett sitting at Ms. Pelosi’s desk with his feet up, just as he had described. (NYT)

Photos of the speaker’s desk show “We will not back down” written on a folder.

Protester leaves note on Nancy Pelosi’s desk: “We will not back down.” pic.twitter.com/656eha7v9S

This man in @SpeakerPelosi
office, writing this on a
manila folder,
“We will not back down”.. pic.twitter.com/9PmqGeYeGG