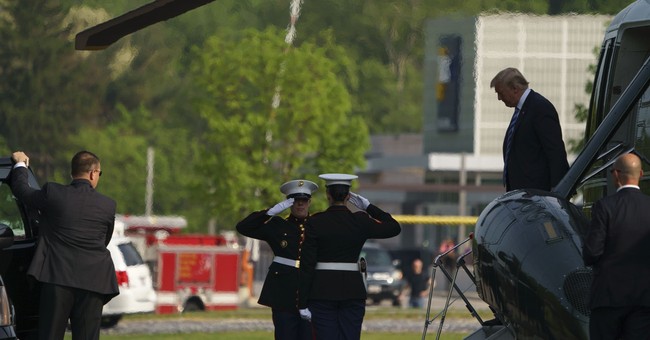 In “Donald Trump v. The United States: Inside the Struggle to Stop a President,” the author says he learned "in the hours leading up to Trump's trip to the hospital, word went out in the West Wing for the vice president to be on standby to take over the powers of the presidency temporarily if Trump had to undergo a procedure that would have required him to be anesthetized." The source of this information is not revealed (of course).

On social media, rumors quickly began spreading that the trip was due to a “cerebral event”—likely a stroke. But this is completely false and Schmidt even called out those spreading the claim.

The book says nothing about a “cerebral event.” It just says that Pence was on standby if they needed to anesthetize Trump for a procedure.

At the time, the White House said he went for a “quick exam and labs” to complete “portions” of his annual physical exam. The visit was not announced ahead of time like his prior physicals were. Then White House Press Secretary Stephanie Grisham explained he took advantage of a down day.

"Anticipating a very busy 2020, the President is taking advantage of a free weekend here in Washington, D.C., to begin portions of his routine annual physical exam at Walter Reed," she said in a statement after Trump arrived at Walter Reed.

After the visit, the president said everything was "great!"

Visited a great family of a young man under major surgery at the amazing Walter Reed Medical Center. Those are truly some of the best doctors anywhere in the world. Also began phase one of my yearly physical. Everything very good (great!). Will complete next year.

Update: President Trump weighed in on the fake news and suggested perhaps people "are referring to another candidate from another Party!"

It never ends! Now they are trying to say that your favorite President, me, went to Walter Reed Medical Center, having suffered a series of mini-strokes. Never happened to THIS candidate - FAKE NEWS. Perhaps they are referring to another candidate from another Party!