Daniel Cameron Lays Into Biden Over Comments About Black People 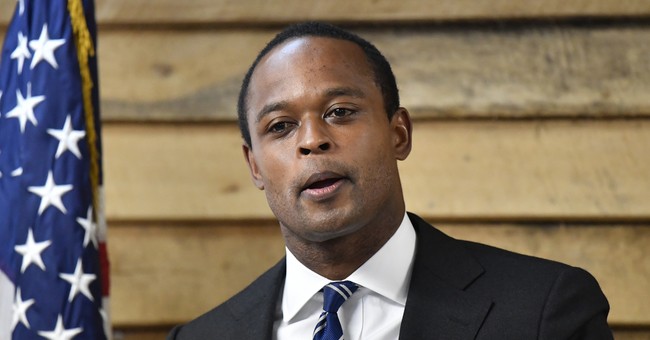 During his speech at the Republican National Convention Tuesday, Kentucky Attorney General Daniel Cameron targeted cancel culture, spoke about the importance of moving the country forward, and blasted Joe Biden for his comments about black people.

As radical leftists destroy and deface monuments across the country, Cameron, the first black AG in Kentucky's history, recalled Abraham Lincoln’s words: “any nation that does not honor its heroes will not long endure.”

"Republicans will never turn a blind eye to unjust acts, but neither will we accept this all-out assault on western civilization," he said. “For Republicans, our heroes are those who propelled an imperfect nation ever forward, always striving to make life better for everyone."

Cameron, 34, said he learned a valuable lesson about life while working at his parents’ coffee shop—people from all backgrounds wanted a cup of coffee.

“That lesson has stuck with me because, despite our difference, we all want the same things: For our children to have more opportunities than we did," he said. "To feel the dignity of work. And to believe that if you play by the rules, you can make a good life for yourself and your family.”

The election gives Americans a choice for the country's future. Going with Biden, the United States would go backward—his decades-long record shows no “wisdom,” Cameron said, “just a trail of discredited ideas and offensive statements.”

"Mr. Vice president, look at me. I am black. We are not all the same, sir. I'm not in chains. My mind is my own. And you can't tell me how to vote because of the color of my skin. " -Daniel Cameron killed it at the #RNCConvention2020. pic.twitter.com/5QCVr0CKYV

"Let’s be honest: no one is excited about Joe Biden," Cameron said.

The former vice president would increase taxes, continue abortion-on-demand, and destroy jobs, Cameron argued. And worst of all, he would do the radical left’s bidding—a group that embraces cancel culture and destroys those who refuse to believe their politics must be dictated by their skin color.

On issue after issue, from criminal justice reform to immigration, Biden’s dismal record speaks for itself.

Cameron closed by comparing America to a family that goes through highs and lows together, but at the end of the day, is not divided.

“We are Americans, united by a collective faith in our Constitution and laws and the fundamental fairness they represent,” he said. “We are defenders of life and of individual liberty. And we carry the mantle of Eisenhower and of Reagan to be a force for good in this world, and one that must always be reckoned with.”