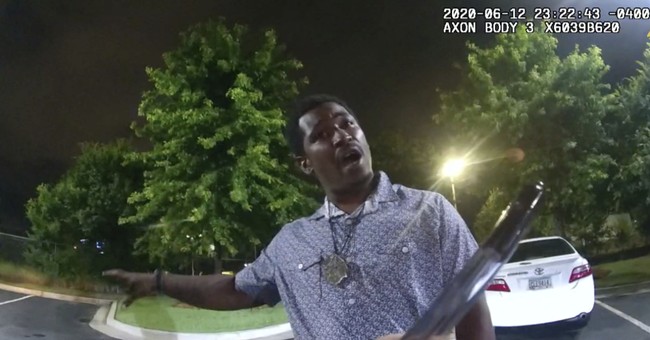 ABC News published a glowing piece about Rayshard Brooks, the man killed by former Atlanta police officer Garrett Rolfe after he resisted arrest, assaulted an officer, stole his taser and discharged it, saying he was remembered for his “hard work and dedication to family.”

The news outlet spoke with those who worked with him at a construction company in Toledo, Ohio, and his wife. Though ABC describes that he was in Ohio “tending to his father," what's not mentioned is that he had failed to notify his probation officer of his new address and a warrant was issued for his arrest while there.

Additionally, nowhere does the story mention his rap sheet of this 'dedicated' family man, which includes convictions for felony cruelty to children, family battery violence, false imprisonment, interference with custody, and more.

Rayshard Brooks was on probation and faced going back to prison if he was charged with a DUI, DailyMail.com can reveal.

It was the fear of incarceration that likely caused Brooks to panic in the face of imminent arrest and caused him to make a break for it. [...]

The charges to which Brooks pleaded guilty and for which he was still on probation dated back to August 2014 when he was convicted on four counts – False Imprisonment, Simple Battery/Family, Battery Simple and Felony Cruelty/Cruelty to Children.

He was tried in Clayton County and sentenced to seven years on the first count, with one year in prison and six on probation and 12 months for each of the other three counts, sentences to be served concurrently.

His sentence was revised, and he was sent back to prison for 12 months in July 2016 when he violated the terms of his probation.

Brooks had not been in trouble since that year until last December when he went to Ohio without informing his probation officer and a warrant was issued for his arrest.

That warrant was revoked and the case dismissed when he returned to Georgia on January 6. (Daily Mail)

Dedication to family. You’ve got to be kidding me. He terrorized his family, abused his children, and beat his wife. pic.twitter.com/e3kGj4dr06

What the media isn’t reporting about #RayshardBrooks needs to go viral. This CRIMINAL caught a felony for beating his wife and terrorizing his children. He was violent his entire life, up until the last moments.

How DARE the media try to spin him into a victim? pic.twitter.com/pkkKDXghxO

District Attorney Paul Howard announced Rolfe faces 11 charges, including felony murder and aggravated assault, criminal damage to property and violations to his oath of office--a move that riled police in the city, some of whom have reportedly not responded to calls, turned in their keys, and not showed up for their shifts.