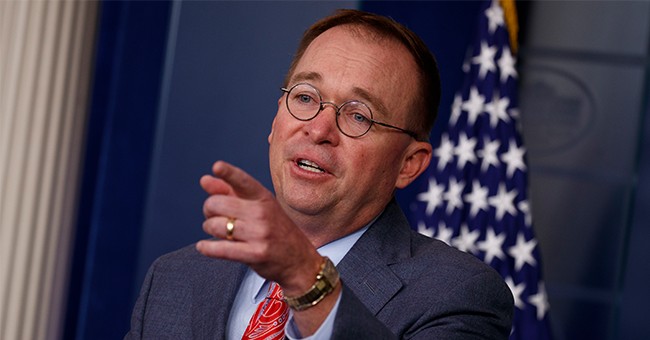 White House acting chief of staff Mick Mulvaney sought to clarify his remarks on Thursday about tying up military aid to Ukraine after critics accused him of admitting to a quid pro quo.

He said the media was “misconstruing” his comments to the press “to advance a biased and political witch hunt against President Trump.”

“Let me be clear, there was absolutely no quid pro quo between Ukrainian military aid and any investigation into the 2016 election,” Mulvaney said. “The president never told me to withhold any money until the Ukrainians did anything related to the server.”

#NEW: Acting White House Chief of Staff Mick Mulvaney walks back his comments from earlier today about the Administration’s dealings with Ukraine:

“Let me be clear, there was absolutely no quid pro quo between Ukrainian military aid and any investigation into the 2016 election.” pic.twitter.com/mqg6JxkwZd

On Thursday, Mulvaney responded to a reporter’s question about the administration’s decision to withhold aid from Ukraine, saying that Trump told him it was a “corrupt place.”

"Everybody knows it's a corrupt place. By the way, put this in context. This is on the heels of what happened in Puerto Rico when we took a lot of heat for not wanting to give a bunch aid to Puerto Rico because we thought that place was corrupt. And by the way, turns out we were right. So put that as your context," he said.

"He's like look, this is a corrupt place; I don't want to send them a bunch of money and have them waste it, have them spend it, have them use it to line their own pockets.

"Plus, I'm not sure that the other European countries are helping them out either. So we actually looked at that during that time before when the money--when we cut the money off, before the money actually flowed,, because the money flowed by the end of the fiscal year--we actually did an analysis of what other countries were doing in terms of supporting Ukraine.

"And what we found out was that--and I can't remember if it's zero or near zero dollars from any European countries for lethal aid. You've heard the president say this, that we give them tanks and the other countries give them pillows. That's absolutely right, that as vocal as the Europeans are about supporting Ukraine, they are really, really stingy when it comes to lethal aid. And they weren't helping Ukraine. And then still to this day are not. And the president did not like that.

"I know it's a long answer to your question, but I'm still going.

"So that was--those were the driving factors. Did he also mention to me in the past the--the corruption related to the DNC server? Absolutely, no question about that. But that's it, and that's why we held up the money."

A reporter pushed back and said it sounded like he was saying it was a quid pro quo.