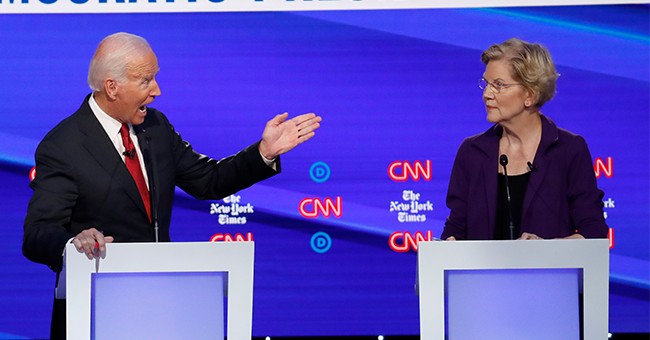 Former Vice President Joe Biden was the clear loser of the night, not only rambling his way through responses, and at many points making completely incoherent statements, but failing to give a strong defense of his son, Hunter, over his gig at Burisma while he was vice president overseeing Ukraine policy—an issue he should have been more than prepared to discuss.

Here are some examples of why Biden crashed and burned last night:

Biden went on to argue that he never "Discussed a single thing with my son about anything having to do with Ukraine. No one has indicated I have.” CNN even fact checked him over this because Hunter himself has said otherwise.

Further, why he actually highlighted Hunter's interview with ABC is anyone's guess. Biden insisted his "son's statement speaks for itself. He spoke about it today. My son's statement speaks for itself." In that interview Hunter admitted he probably would never have gotten the job with Burisma if his last name weren't Biden and that he had no knowledge of the natural gas industry or Ukraine.

2. Biden's debate performance did nothing to assuage concerns about his mental sharpness. Below are just some examples where he really...shined.

When each candidate was asked about friendships that would surprise people, Biden at the start mentioned two people, but never discussed who the second person was.

Another bad night for Biden in terms of being mentally sharp pic.twitter.com/QpeGgyoFX6

He also seemed to not be able to keep Middle Eastern countries straight. He mistook Iraq for Syria when he said he would "not have withdrawn the troops and I would not have withdrawn the additional thousand troops who are in Iraq, which are in retreat now, being fired on by Assad's people." And then he stumbled again when he said, "what is happening in Iraq is going to -- I mean, excuse me, in Afghanistan, as well as all the way over to Syria, we have ISIS that's going to come here."

On a different note, his entire response on whether he believed Sanders and Warren's tax plans demonize the wealthy was a train wreck. It was so bad it's best to just read it for yourself:

I would double it, because guess what? Why in God's name should someone who's clipping coupons in the stock market make -- in fact, pay a lower tax rate than someone who, in fact, is -- like I said -- the -- a schoolteacher and a firefighter? It's ridiculous. And they pay a lower tax.

Joe Biden wants those clipping coupons in the stock market to pay their fair share https://t.co/KKZ6aYuz3e

"Secondly, I mean Thirdly" - Joe Biden listing his points at the debate (also Joe Biden describing his standing in the polls following this debate performance)#DemDebate

3. An awkward moment came when Biden yelled at Warren on the debate stage for helping get her votes for the Consumer Financial Protection Bureau. It was not a good look.

Needless to say, Biden had a terrible evening and to cap it off, he defended his age (he'd turn 80 during his first term), by arguing that he's running because of his "experience" and "wisdom." Good luck with that argument.