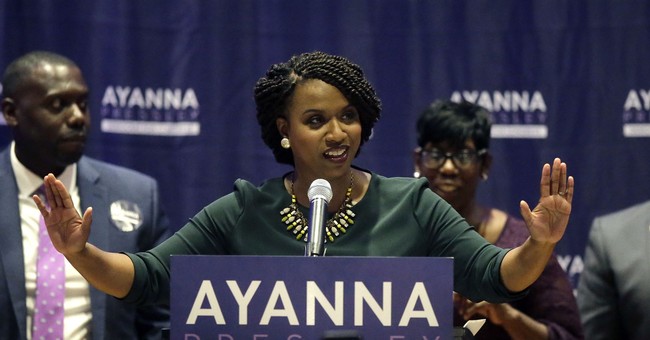 Freshman Democratic Rep. Ayanna Pressley introduced an amendment Wednesday that would lower the federal voting age from 18 to 16.

Making her case, the Massachusetts Democrat said that “those who will inherit the nation” should have a say in the elected leaders who represent them. She pointed to the youth’s activism on issues such as gun control and climate change as one of the reasons for her proposal.

“Our young people deserve to have the opportunity to have their right to vote,” she said. “We celebrate them often and lift them up as foot soldiers of movements. We thank them for their sweat equity that they expend at the forefront of change, and they should have the opportunity to be respected and celebrated as ballot-casters,” she said Tuesday.

I am honored & excited to be introducing my very 1st amendment on the House floor, an amendment to #HR1, the #ForthePeopleAct. My amendment will lower the voting age from 18 to 16, allowing our youth to have a seat at the table of democracy. #16toVote pic.twitter.com/67IzCtUh8k

Even if the House votes to adopt the amendment, the sweeping election-reform bill will not move forward, as Senate Majority Leader Mitch McConnell said he won’t bring H.R. 1 up for a vote.

"One of our two major political parties has begun embracing one radical, half-baked socialist proposal after another. It's really a sight to see," McConnell said Monday. "This sprawling 622-page doorstop is never going to become law. I certainly don't plan to even bring it to the floor here in the Senate.”

He described the bill as a "sweeping Washington, D.C., takeover of what Americans can say about politics and how they elect their representatives."

Share this on Facebook
Tweet
Virginia Democratic Party Files Complaint Against Youngkin Campaign, Claims Ads Failed Disclaimer Requirements
Landon Mion
In Final Weeks of Virginia's Gubernatorial Race, It's Clear Where Momentum Is
Rebecca Downs
Trump Has An Idea on Who Should Run for Governor of Wisconsin
Rebecca Downs
Democrats Have Some Really Bad News for Fierce Trump Critic Adam Kinzinger
Rebecca Downs
President Joe Biden May Not Be Able to Escape This Major Crisis Before the Midterms