Graham Slams Dems, Vows to Get to Bottom of FBI Probe 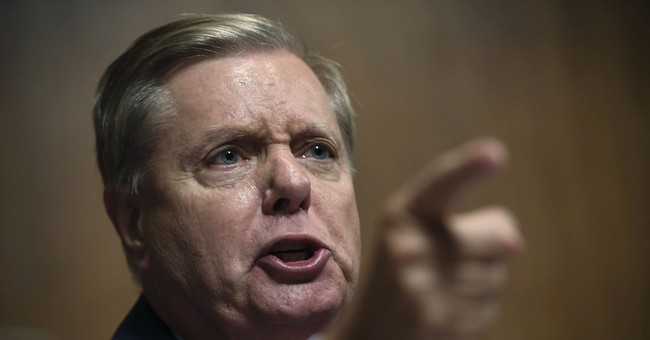 Sen. Lindsey Graham is still fired up after Thursday’s hearing with Supreme Court nominee Brett Kavanaugh and he’s not going to let Democrats get away with their handling of the judge’s confirmation hearings.

On Sunday, the South Carolina Republican vowed to “get to the bottom of” the FBI probe into the sexual assault allegations lobbed against Kavanaugh and said an investigation of the Democrats' behavior has only just begun.

Graham told Fox News’s Maria Bartiromo that he will first determine which staffer recommended attorney Debra Katz to Dr. Christine Blasey Ford and why that person failed to tell the committee about the allegation if they believed it was serious enough to warrant a lawyer.

“Ms. Ramirez said one of the main reasons she came forward, she was urged by Democratic senators to talk, to give an interview. Well, if a Democratic senator believed she had something serious to say, they should have reported it to the committee, so we can investigate it, not to the media, so it would be allegation number two,” Graham explained.

“We can't let those people who betrayed Dr. Ford's trust get away with it, because that will affect the committee in the future,” he said.

Graham said he does trust the FBI to carry out its week-long investigation, which was a condition Sen. Jeff Flake demanded before he would vote to confirm Kavanaugh.

“I promise everybody who's listening, we're not going to let them get away with this,” he said. “If this is the new normal, nobody will come forward.”

The senator, who delivered an impassioned defense of Kavanaugh and take-down of Democrats from the dais on Thursday, concluded by pointing out the hypocrisy of it all.

“If I had done what Democrats had done, if I had recommended a conservative activist lawyer against a Democratic male nominee, an accuser who came forward in South Carolina, and I hid it, and I didn't tell the committee about it, I would be destroyed,” he said.

“The double standard here is unacceptable,” he added. “And we're finally going to do something about it.”