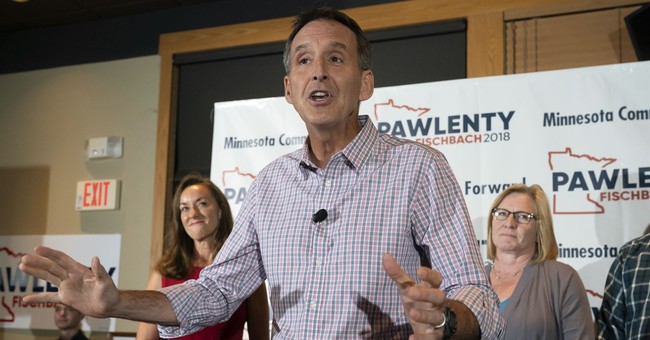 Pawlenty, it seems, was unable to overcome his criticism of Donald Trump in 2016 as “unhinged and unfit,” and now joins the list of other prominent Republicans whose opposition to Trump carried a political price tag, including Reps. Mark Sanford and Martha Roby and Sens. Bob Corker and Jeff Flake.

“The Republican Party has shifted,” Pawlenty said after conceding the race, reports the Minneapolis Star Tribune. “It is the era of Trump, and I’m just not a Trump-like politician.”

A twice-elected governor, former presidential candidate and banking lobbyist, Pawlenty lost decisively to Jeff Johnson, a commissioner of Hennepin County. Pawlenty’s defeat came after he and his allies outspent Johnson by a margin of roughly 3 to 1, according to a Democratic consultant tracking the spending. When Trump recently visited Duluth for a political rally, Pawlenty decided not to attend.

“Tim Pawlenty stuck his finger in the wind,” Johnson said in his closing ad, which condemned Pawlenty’s criticism of Trump after the release of the Access Hollywood tape in October 2016. “I won’t panic when it matters most.” (WaPo)

"My message is not partisan," Johnson said in a statement after his win. "Regardless of ideology, Minnesotans know that government is not working. We all see the dysfunction at the end of every legislative session, the power of special interests and the string of government failures. And most Minnesotans know that government is wasting too much of our hard-earned money and making too many decisions that we should be making for ourselves.

"St. Paul is broken, the status quo has failed everyday hardworking Minnesotans for too long and together we will change that starting in 2019. I can’t wait for the campaign ahead and the contrast of this vision with Tim Walz's and the Democrats."

Johnson will take on Democratic Rep. Tim Walz, who won the party's three-way primary for the governorship, in November.