Trump Criticizes May Over Brexit Plan: 'She Didn't Listen to Me' 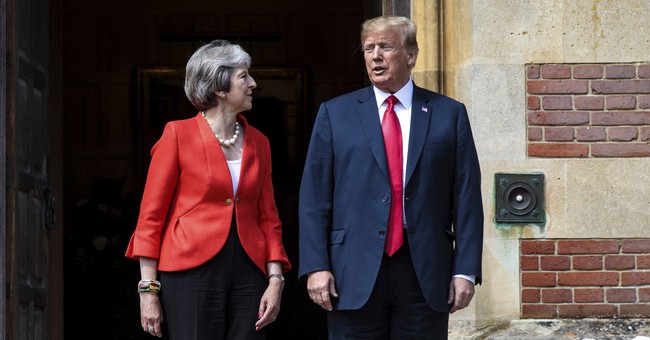 "I would have done it much differently. I actually told Theresa May how to do it but she didn’t agree, she didn’t listen to me,” Trump told The Sun. "She wanted to go a different route. I would actually say that she probably went the opposite way. And that is fine, she should negotiate the best way she knows how. But it is too bad what is going on."

He also cast doubt on her plan, saying it didn’t really reflect what the people wanted.

"The deal she is striking is a much ­different deal than the one the people voted on. It was not the deal that was in the referendum,” he told the paper.

May, who voted "Remain" in the 2016 referendum on leaving the EU, proposed earlier Thursday that Britain and the bloc would stick to a "common rulebook" with the EU for goods and agricultural products in return for free trade, without tariffs or border customs checks. Such a resolution would avoid disruption to automakers and other manufacturers that source parts from multiple countries.

The plan has enraged so-called "Brexiteers," who have looked to a possible U.S.-U.K. trade deal as one of the biggest boons that would result from leaving the 27-member bloc. (FoxNews.com)

Trump said if the UK follows through with her plan, it could wreck a vital trade deal with the U.S.

In the same interview the president heaped praise on Boris Johnson, who resigned over the soft Brexit plan earlier this week, saying he would “make a great prime minister” who has “what it takes” to be an effective leader.

May was quick to respond to the criticism, saying in a statement:  “We have come to an agreement at the proposal we’re putting to the European Union which absolutely delivers on the Brexit people voted for.

“They voted for us to take back control of our money, our law and our borders and that’s exactly what we will do.”

“As he said in his interview with the Sun she 'is a very good person' and he 'never said anything bad about her'. He thought she was great on NATO today and is a really terrific person,” Sanders said, reports FoxNews.com.