This Graph Shows Just How Conservative Kavanaugh Is 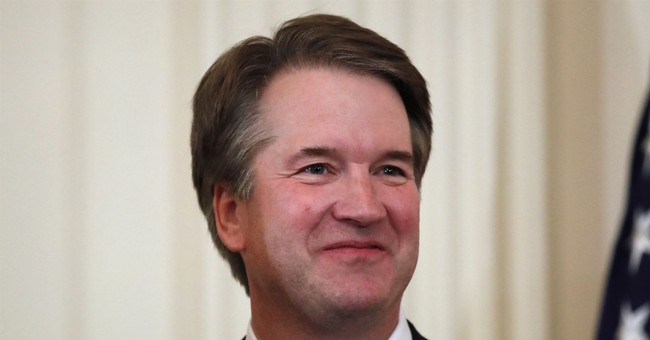 As Cortney explained on Monday, conservatives are divided on President Trump’s nomination of Brett Kavanaugh to fill the seat of retiring Justice Anthony Kennedy—some worry he is too establishment given that he went to Yale for both undergrad and law school, clerked for Kennedy and was also a Bush appointee. Other conservative critics are suspect because of how he ruled on a 2011 Obamacare case. Many conservatives are lauding the choice, however, with Judicial Watch's President Tom Fitton arguing that Kavanaugh is "extraordinarily conservative."

But where does he stack up ideologically compared to other Supreme Court justices? If confirmed, he’d be one of the most conservative on the bench.

Brett Kavanaugh, President Trump's nominee to replace Justice Anthony Kennedy on the Supreme Court, would have the second most conservative score (0.693) on the bench if confirmed, next to Justice Clarence Thomas (0.725), per a measure that scores judges on a liberal-conservative spectrum.

Why it matters: Kennedy often sided with the liberal wing of the court, so with this choice, Trump is cementing a solid conservative majority on the bench.

How to read the chart: An analysis by political scientists Lee Epstein, Andrew D. Martin, and Kevin Quinn places judges on an ideological spectrum called the “Judicial Common Space." Conservative justices receive scores from 0 to 1, liberal justices from –1 to 0. (Axios)